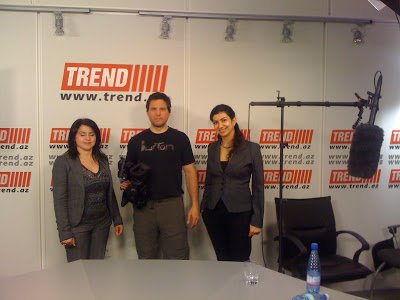 So, here I am with (left) Ilaha Mammadli, a finance journalist from “Trend,” an international news services with offices in Baku. On the right is Rasmina Gurbatova, the film’s director. . . Most people speak Azeri to each other on the streets, but this interview was conducted in Russian. And although the vast majority of people in Baku speak Azeri, many people communicate in Russian. One expat told me it is elitism. Is it possible that despite 70 years of Soviet totalitarianism in Azerbaijan, Russian is still the urbane lingua franca here? Haven’t most cities that were colonized by the USSR (Budapest, Vilnius, Dresden) dispensed with its Lenin statues, Politburo leaders, and vestiges of Russian culture (language, etc) long ago? Baku, however, is an exception: is this because Baku has been a multi-ethnic crossroads for as long as it’s been a city? Only recently has it become majority Azeri. . . . For me, it’s a surprise that card-carrying Azeris still speak so much Russian without it messing with their Azeri nationalism . . .