Home » Blog » On the 20th Floor Above a City of Contradictions

On the 20th Floor Above a City of Contradictions 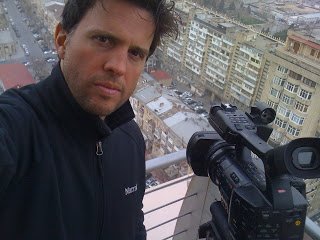 On the 20th floor deck of the Landmark Hotel in Baku. Filming the hubbub of a city in transition. It’s cold, this “city of wind,” with the Caspian’s expanse so thorough, I feel like I’m at the ocean’s edge. About 12 years ago, the per person income was less than $1,000; today, it’s more than $10,000. The sole reason: oil. And the newfound wealth is evidenced in a hundred cranes bowing over the cityscape. Pricey cars share the streets with old Russian Ladas. Slick businessmen strut past old rural grandmas. A sleek, postmodern glass facade reflects a 13th century stone wall of the Old City. Baku, a contradiction.