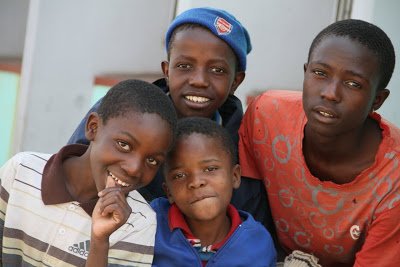 I’m in Bulawayo, Zimbabwe’s second city. Today, I’m spending time with four boys that have benefited from being part of Catholic Relief Service’s programs here. At first, they are reticent, eyes quiet and downturned. “Bonding” is penciled into the shooting schedule, so the boys start to feel comfortable before I start shadowing them with a camera. So that means . . . soccer! My old skills come in handy as we play a spirited game and I earn a little street cred with these little guys.

Nkosilathi is the oldest, the weight of his responsibility heavily apparent on his face. He’s 19, but has been raising his three brothers by himself since both of his parents died and an older sibling fled to South Africa — stressed by the chore.

Handsome is 14. His smile belies his status: orphan, absolutely poor. John is 12. He is second in his class. Nqobizitha is 9. He is short and slight as a 6 year old. Even saying his name requires a unique tongue clucking like from that movie The Gods Must be Crazy.

Their house is a concrete shack measuring about 10 feet by 8 feet. Without a bed, they sleep on the floor covered in blankets. Without a table, they eat with their hands from bowls resting on the floor. Without electricity, they’ve pirated a neighbor’s line via a wildcat cable.

But they have each other, newfound support from a local group, and things are looking up. Their spirit strengthens my resolve to do better in everything I do.