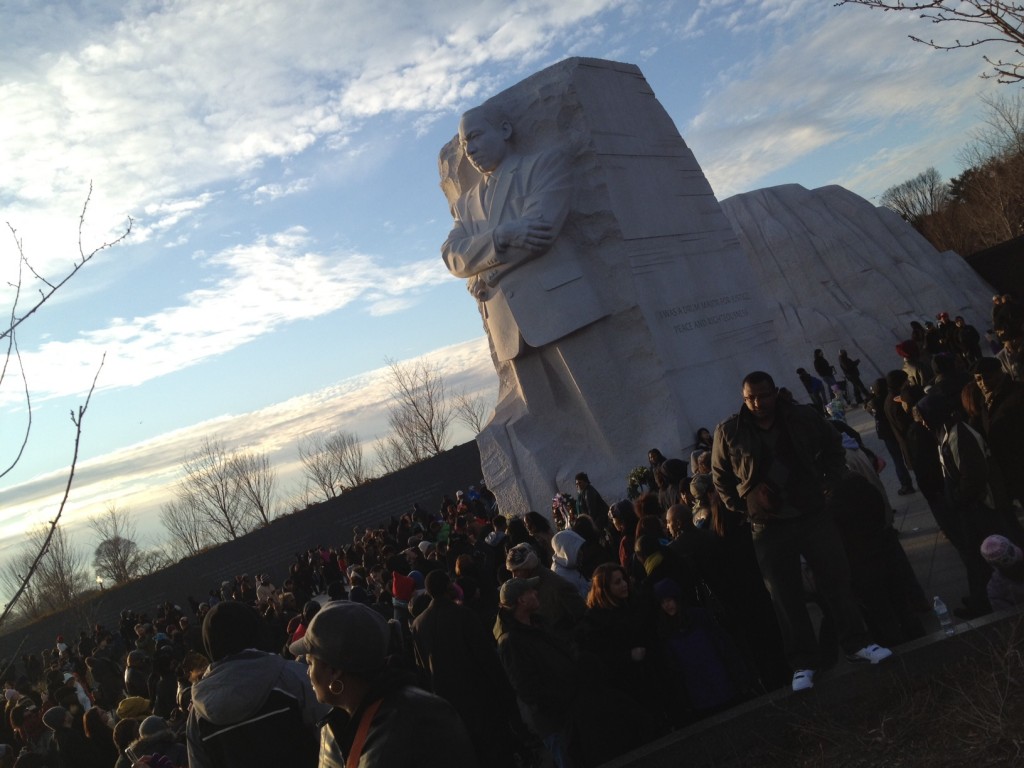 It was cold and bright today at the MLK Memorial on the Mall in DC. Lots of people cycled through inspirational quotes, craned their necks up at the towering stone likeness, and hammed it up for photos on the banks of the Tidal Basin.

It’s fitting that the new Memorial for Dr. King is located between the Lincoln Memorial and the Jefferson Monument. Lincoln kept our country together and hastened the demise of slavery. Jefferson espoused (if he did not always live) the ideals that distinguished our young country from all others.

There’s been a lot of press about Dr. King’s mien. Is he too angry, imposing?

I wanted to decide for myself. I checked it out up close; from far away. For me, it’s the right tone. Fighting discrimination has been a long, bitter battle. You don’t get there with a smile and a pat on the back. Like Congressman Andrew Young (who I interviewed last month), you do it with with an iron resolve, an uncompromising commitment to non-violence, and perhaps a strong faith.

Dr. King fought the powers that be with that approach. His message was confrontational. Upending institutionalized injustice always is.

And that’s why i think the Memorial will keep growing on me. It’s good to see Dr. King’s message in that stone just as much as his visage. And it’s a credit to our country that we’ve put him right there on the Mall smack dab between our elected Presidents.

It’s a reminder that citizens like you and me — despite unjust laws or even public opinion — can still make this country a better place.

That’s something I can believe in.