Shattered Sky: A Whirlwind of Good 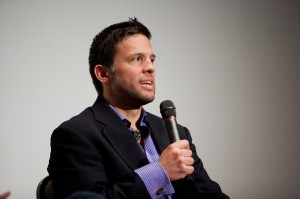 Since the March 22 premiere of Shattered Sky at the DC Environmental Film Festival, it’s been a whirlwind of good: NY Times coverage and lots of contacts with festivals, colleges, and activists who want to play the film.

Most importantly, our Shattered Sky team is growing, and setting a solid foundation for a campaign to make a huge impact on the issues come September – the 25th anniversary of the Montreal Protocol, the international ozone treaty.

The New York Times article quoted me well: “Shattered Sky is not about the science. It’s about what a responsible leader does when there’s a good chance the science is right. It’s important to remember that the first draft of the ozone treaty wasn’t perfect. It was a first step. It showed the world that America was committed to lead — and that made all the difference.”

The festival was super. Expertly run, our screening was super packed. We had Sunshine Mendez moderating, with Rolling Stone editor Jeff Goodell joining Dan Evans and me on stage for the panel afterwards.

We had a private reception at the nearby Hotel Rouge following the panel, with about 100 people. National Wildlife Federation CEO Larry Schweiger talked about the educational partnership with Shattered Sky.

I’m personally really excited about this, and will write more as it continues to take shape. The outreach will focus primarily on high school and college. It will be national. It will be a combined science and civics curriculum. And it will focus on the positive message that America led the world to a solution on the ozone crisis during the Reagan Administration—and we can do it again on energy and climate.

If you’re on Facebook, you can see the photos of the film, the vibe, and the party.

It’s been a crazy month, but has exceeded all my expectations. Thanks to everybody for all you’re doing to get our campaign going. You know who you are!