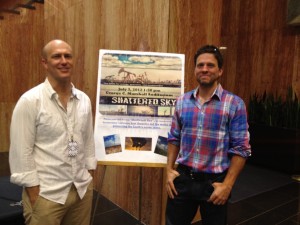 It was a great way to celebrate Independence Day: a screening of Shattered Sky at the U.S. State Department on Tuesday. It was an honor, given the history of the institution and the role its employees played during the ozone crisis.

George C. Marshall auditorium welcomed us: the “Marshall” in “Marshall Plan.” Dan Evans and I fielded a bevy of smart and challenging questions following the show: about climate policy, the interplay between regulation and technology, the importance of citizen action.

In 1985, 20 countries signed the Vienna Convention to set up a framework for negotiating international regulations of ozone-depleting substances like CFCs. Chief U.S. Negotiator Richard Benedick (who is in our film) must have walked these State Department halls and had lively debates with his team. How would they set the tone for global cooperation on a future global treaty?

Less than two years later, following the discovery of the ozone hole, Benedick and the EPA’s Lee Thomas led the American presence at the important signing of the Montreal Protocol, where 24 countries formally committed to phasing out 50 percent of CFCs. Subsequently, the Montreal Protocol got updated seven times, and more than 190 countries eventually signed it. And they all phased out 100% of CFCs.

For me, that’s the main lesson on climate. You don’t have to get it 100% right at first. Gather up the main players, take an important first step. Then update the plan together. Don’t let the perfect be the enemy of the good. We’re coming up on the 25th anniversary this September. Hopefully, more of us will take notice that in 1987, America led the world to a global solution on the ozone crisis.

Will we will all take inspiration to take smart action on climate? Only time will tell.