Kickstarter, Bloomberg, and the Care2 petition 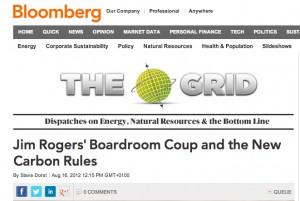 Pretty excited today. An article I wrote got picked up by Bloomberg. It’s in Bloomberg’s Sustainability blog, “The Grid.” It’s about my experience interviewing Jim Rogers — the CEO of America’s largest coal utility — for Shattered Sky. About the lessons of the ozone issue, through the eyes of America’s most powerful coal executive.

Today is also the second day of the Shattered Sky Kickstarter campaign. It’s been an incredible response, with $9,200 given, by 54 backers in the first day. It’s not easy launching a project to raise $35,000, but it sures allays some fears when you raise 25% in the first 24 hours. If I reach my Kickstarter goal, Shattered Sky’s distribution will be great: festivals, promotion around the PBS TV distribution, and Facebook contests and other initiatives to accompany grassroots events. Here’s my first Kickstarter update.

I’m also encouraged by the progress on the petition, which I’m conducting with Shattered Sky’s advocacy partner, Care2. More than 4,400 people have now signed it, demanding that candidates Obama and Romney pay more attention to climate and energy issues in their election runs.