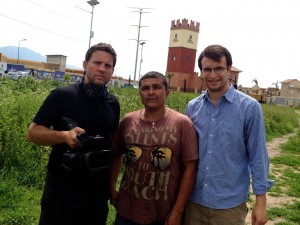 Delfino’s a cypher. I’m riding shotgun with this 40-something Mexican, camera in my lap, finished filming for the day in Mexico City. Delfino’s on about some subtle details of a fuel-injected engine. In English.

I hold up my hands in protest. Sorry man, I don’t understand a thing. He keeps at it. Turbo this, catalytic that. I smile.

Delfino’s clearly a master at his mechanic trade, but he can’t read or write. He’s fluent in English and Spanish, but struggles to make ends meet.

I’m here to make a short film for a DC-based group that invests in Vinte, an affordable housing company. Delfino is a first-time homeowner in a Vinte complex, where units start at $23,000.

How does the company do it? Partly it’s economies of scale. Delfino’s complex will eventually have more than 5,000 units. But it’s also the novel condominium business model, with security, paved roads, and reliable water, lights, and Internet. It’s a stellar option for people who grew up in Mexico’s messy informal settlements.

I’ve spent parts of three days here and have to admit, the neighborhood’s nice. It’s clean, quiet, and safe. Delfino’s three children, all younger than age seven, love the community park that has a biking path, basketball court, and jungle gyms.

We do the interview here. For Delfino, it brings back a flood of memories. His parents moved to California when he was a toddler (which explains his mastery of English). He dropped out of school at age nine, but rebuilt his first car engine at ten. His face lights up talking about that first car, how it won a race, how he realized he could build things. He had a gift.

When his father returned five years later, Delfino’s mom enrolled him in school, but it was far too late. Delfino was making good money as an apprentice mechanic. And besides, school was tough. Fixing cars was easy.

The interview wraps. In my ten-plus years working as a filmmaker, I’ve never let a subject help on set. Many volunteer, but it’s a polite gesture that I politely refuse. Before I realize it, Delfino is dismantling lights and rolling cable. He insists it’s his first time around this type of equipment. We work silently, as if we’re a team. Of course, he manages to pack everything up just right.

As he closes the last pelican, I reflect that this is why my job is so cool. Yes, the travel is incredible. But the best thing by far is the personal connections. And it’s the documentary process that I have to thank for it. The peculiar way that reality, premise, and personal narrative combine to create something unpredictable and authentic—and periodically, sublime.

Delfino’s had a hard life, but he’s in a good place now providing for his family. He opened up his life for a few days and I’m better for it. The master mechanic with the irrepressible smile.