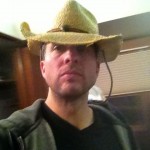 When I first got the call, I wasn’t wearing a cowboy hat. It was November 2010. The TV series was called “Survivor Tales.” It was its first year, and more an idea than a series. Produced by an upstart production company in DC with a skeleton staff, they’d just lost their DP/editor when he moved to NYC to work on a (now defunct) reality show, and outsourced creative to an underling. They were halfway through their third episode and needed some pickups in rural Minnesota . . . on a ranch . . . of a dog . . . named Dakota.

First, I got familiar with the footage they had in-the-can. Unfortunately, it was rough. Master interviews in a server room, the rattle and hum of machines over voices. And a run-and-gun style that might have made sense on the battlefields of Afghanistan or Iraq (where my friends John Collin and Ryan Hill have captured some beautiful images, notwithstanding the inhospitable environment), but was just sloppy for this context.

The next day, I found myself at the University of Minnesota. It was sink-or-swim time, since we were a crew of two — the producer and me. I ran camera, lights, and audio. I found a deep, quiet hallway for the interviews. At the time, they only had budget for the Sony EX-1, so I needed all the depth I could wrangle. Then I started directing broll of the doctors, mostly lab setups to help bring to life their cutting-edge research.

The next day was more fun, chasing a black Lab around a 100-acre ranch. This dog, Dakota, had beaten brain cancer thanks to a revolutionary vaccine the doctors were hoping to adapt for people someday.

Footage from that first shoot eventually made it into episode #10, “Dakota’s Brain”:

The good thing about when a DP/editor skips town, the production company needs to find a replacement DP and editor. They liked my Minnesota footage, and then entrusted me with the writing and editing of the show.

Little did I suspect, but this gig would grow to me serving as DP, writer, and editor for 10 episodes over the next two years.

The next month, I flew to LA. where I spent four days with Toby Forrest, who was bravely overcoming an incredibly devastating spinal cord injury to become an accomplished actor and singer. The narrative arc on this story was amazing.

One night I followed Toby verité style to a gig at the Viper Room on Sunset. I got a Director credit on this show, which became episode #1, “Toby’s Story”:

Like every shoot, “Toby’s Story” had challenges. At the Viper Room, I would have preferred a second camera, and we weren’t allowed lights, tripod, or an assistant. Most challenging, on the final day we had about an hour of sunlight left to shoot a conclusive scene, but we were stuck in the Valley in Van Nuys and my producer didn’t have any ideas. What’s more, we didn’t have a wheelchair-enabled vehicle. What to do?

Fortunately, having graduated high school nearby (Redondo Union High!), I knew just the place. I took the wheel of Toby’s van, drove south on the 405, and pulled into Redondo Beach right at golden hour. “Toby’s Story” concludes with what I shot next. “Will I walk again, I don’t know,” muses Toby in extreme closeup as he gazes toward the sun-dappled Pacific. “Will I be independent again? I sure hope so. Will I adapt to my circumstances? Most definitely.” Cut to Toby’s point of view. A jogger, in silhouette, exits frame left. Music track fades up. It is the end of Suite 68, which brought down the house at the Viper Room. Against a wistful final guitar lick, Toby’s own lyrics close the episode: “All alone in my misery.”

Steve Dorst earned credits as DP, Writer, and Editor on 10 episodes and Director on 4 episodes of the TV series, Bench to Bedside, which was acquired in 2013 by the commercial television arm of Australian Broadcast Corporation for global distribution. With a producer, Dorst captured inspirational stories and cutting-edge research on location across the country. Filmed documentary-style, the series is about true stories, real diseases, and high stakes.