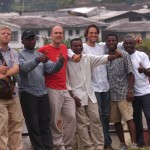 Seven years ago last month, with both legs dangling out of an old African military helicopter, I trained my film camera down at small dots of racers during the world’s most extreme running race. The participants in the Mt. Cameroon Race of Hope still had 25 miles and 10,000 vertical feet to go to reach the roof of West Africa. We screamed up the main drag from Molyko Stadium, spitting up red dirt above thatched-roof huts to Upper Farms with its thousands of joyous fans.

It was my first time directing a documentary. I had no cash. So I put everything on credit cards, hired a knowledgeable DP to head up filming, and then Dan Evans left Washington, DC to fly to Buea, Cameroon. Little did I know that it would go on to do well in film festivals, get distribution around the world, and remain to this day the only documentary that chronicles this extreme running race.

If you like documentary films or running, or appreciate projects that are really a wing-and-a-prayer, then spread the word about Volcanic Sprint.

If you like documentary films or running, or appreciate projects that are really a wing-and-a-prayer, then spread the word about Volcanic Sprint. How can you help? Share the FB post that accompanies this blog post. Rate Volcanic Sprint on IMDB (we don’t have many ratings, and a few boneheads gave us 1 out of 10 ratings, so you can help counteract that . . . if you want!).

Check out the Volcanic Sprint website, where US endurance running legend Scott Jurek says: “Insurmountable challenges, true courage, a triumph of the human spirit. Inspiration for runner and non-runner alike!” US marathon record-holder Deena Kastor says, “This movie captures the competitiveness, danger, and heroism of the world’s most difficult marathon.” And 2009 NYC marathon champion Meb Keflezighi calls Volcanic Sprint “A wonderful movie that is uplifting and inspirational!”