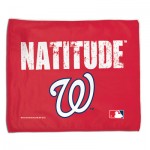 We interrupt this regularly programmed blog on film and video so I can vent about something that I didn’t realize I cared so much about: the bad, boring, blowhard Washington Nationals.

They’re bad: 9th of 15 NL teams, with a losing record, 29-30. But they’re worse than their record indicates. Of 30 teams in baseball, the Nats are 28th in batting average, 27th in slugging average, 29th in runs scored, and 30th in on-base percentage.

Because they don’t score, they’re boring. At least the Colorado Rockies lose games 9-8 and fans can chat about the 10 home runs they saw! Yes, Strasburg and Harper are exciting, but they’re both injured (along with about a fourth of the team).

Worst of all (and it pains me to say this), the Nats are blowhard. When New York Jets Coach Rex Ryan predicted he’d win the Super Bowl in his third season, I thought he was full of it.

That’s because since birth, I’ve been a Steeler fan. Steelers and their fans can be a lot of things, but we don’t tend towards acting the fool or self-aggrandizement. It’s about the team. And Coach Mike Tomlin is the anti-Rex Ryan.

Is Nats skipper Davey Johnson any different? His pre-season boast, “World Series or bust” became a rallying cry before 20 year-old Harper and 24 year-old Strasburg had even played a full season together!

And the DC media ate it up. It’s been a dry spell here. But sometimes you have to ask yourself whether it’s sports journalism or wish fulfillment. In fact, the hype has inspired a rash of Onion-like articles proactively inducting the pair into the Hall of Fame.

But this is American sports. Hyperbole rules. I get that. Big-market teams have big pocketbooks, hyped players, and braggart media. ESPN talking heads play armchair quarterback with all the reserve of Ann Coulter heckling an ACLU gathering.

Yet what I didn’t realize is that I cared so much.

After going to exactly one Major League baseball game in the two decades between 1992 and 2011, I’ve been to 20+ Nats games in the past two seasons. Where’d this passion come from? Did I catch . . . “Nattitude?”

I broke up with baseball at 11:52pm October 15, 1992. That was the moment Barry Bonds’ throw to Catcher Mike Lavalliere arrived a split second too late. The Atlanta Braves’ Sid Bream score the walk-off, overcoming a two-run deficit with two out in the bottom of the ninth to dispatch my Pittsburgh Pirates in the 1992 NLCS.

But because the small-market Pirates couldn’t sign these budding stars to big money, they lost them all. In 1993, they finished 22 games back, and have been stuck there ever since.

I was only 20 at the time, and baseball and football were my favorite sports. But the way money dominated baseball didn’t seem fair.

So I broke up with baseball. Went cold turkey. Stopped pouring over statistics in the morning paper. Packed away my Topps mint-condition cards. Muted my amazement that Dave Kingman could ding 35 homers while hitting .210; stopped comparing Rickey Henderson to Lou Brock to Ty Cobb; Nolan Ryan to Steve Carlton to Sandy Koufax to Walter Johnson. Stopped it all.

Lots changed in me, but little in baseball.

In 1992, when the Pirates lost Barry Bonds to the free-agent market, I wanted to be a college professor. The next year, I was an aspiring homeless advocate. By 1995, I wanted to be a professional piano player; in 1997, a management consultant, and (finally) in 2001 a documentary filmmaker.

All the while, the Pirates were losing, and I didn’t care. Baseball was dead to me. And it’s not clear to me if MLB tried to fix what ails it. In fact, the Pirates still haven’t had a single winning season. In 20 years.

OMG, DID I CATCH “NATTITUDE”?

Fast-forward. In Washington, D.C., with a family, career, and the Pirates-pain dulled by the passage of time, I didn’t see it coming.

The 2012 Nats snuck up on me. After their 2011 losing record, they became exciting! And it brought up a lot of great memories of baseball and my youth.  I started buying SRO tickets to watch this underdog team—hanging at the Red Barn, drinking IPAs,  and eating burgers at Shake Shack—just enjoying the new stadium!

I’d check stats in the morning paper, like I hadn’t done in 20 years, text friends with predictions on upcoming games, dissecting last night’s.

I was becoming a fan again.

So, as a new fan, here’s my two-cents: Nats, thanks for making baseball fun again. It’s been a while. I don’t need a World Series this year, nor predictions about it. Nats media: I don’t need the hype. I’m happy to see you build a good, solid franchise (perhaps like the Pittsburgh Steelers) that is in contention for many years to come. You’re a young franchise, and GM Rizzo seems to be doing a great job building young talent. Don’t start swinging your money stick around like the Red Sox, Yankees, and Dodgers. It cheapens the sport. Acquisitions like Jaysen Werth ($126 million) and Dan Haren ($45 million) remind me why I’m paying $9 for a lite beer. And it reminds me of the Pirates.

So, if I’m going to trade in my self-imposed baseball isolation for the big-market Nats, it only feels right if you do it with class.

Oh, and can you score some runs?