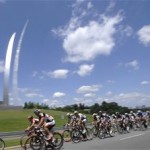 The 2013 Air Force Cycling Classic Challenge Ride had 1,408 people this year—a fun mix of both avid and recreational cyclists. This was my fourth year. Previously, I’d always bonked at some point and fallen back. Sunday, my objective was to stay with the lead peloton, and then sprint off the front to win. I told a few people this goal, and I got some weird looks — I haven’t done any real categorized road races before. But . . . I’ve been training a lot more this year.

First, my stats: I averaged 23.1mph for 65.1 miles, for a 2:49.03 total time. Here are the results. (Edited: Seven riders completed 8 laps and are listed above the lead peloton in the results, but the fastest among them finished the 7 laps more than 5 minutes and 2 miles behind us . . .)

The Challenge Ride is not to be confused with the Crystal Cup, where world-class pro racers compete about a half hour after we clear the course (JJ Haedo won this year). The weekend series also includes categorized races, with seriously talented Cat 1 to Cat 4 racers competing for small prize money. In fact, watching the Clarendon Cup Saturday for maybe the 8th year in a row, I was blown away by their endurance, power, and bike-handling.

For the last few years, I’ve been riding most Sundays with neighbors. It’s a good group, and can get competitive—in a good way—since they are really strong riders. This year, we have a small contingent going to the Crystal Cup. I meet up at 6:30 with Eric Miller, Phil the Hill, Steve Cahill, Bill Mowery, and Mowery’s son Jack (age 11, a great athlete). Colin Brown will meet us at the starting line, but we never find him.

The start is messy and crowded. I wish I was closer to the front, but participants in various corporate and team challenges get to start up there. Almost as soon as the horn sounds, I lose track of Phil and Eric. Normally, Bill “Orange” Berlin is wearing his eponymous jersey, which serves as an effective beacon. This year, he’s outta town, and we have none.

I’m winding in and out of lots of riders. An early accident gets the adrenaline flowing. About three miles up Route 110, five guys in United Healthcare and DC Velo kits race past with a purpose. That’s our cue. Cahill and I glom on. By the Iwo Jima Memorial, our turnaround, we have a peloton of 15 riders. These guys are out to win it. The size of the group will ebb and flow between 10 and 20 riders until I make my move at the end of lap 6.

While I ride, I review my plan: to sit in with the lead peloton, pull as little as possible, keep as much in the tank as I can, eat a gel every 45 minutes, match any breakaways in the final lap, and then try to separate at the end. I’d figure out exactly where to make my break as we loop around.

Lap 1 is hard. The peloton has not yet coalesced, and we’re jerky. I’m not feeling warm yet, so I stay at the back. The problem is, I keep yo-yoing. At the turnaround, Cahill yo-yos as the peloton accelerates and I lose him. I remember what my friend, ex-racer Ron (see photo) always says about staying in the first third of the peloton, so resolve to move up.

By lap 2, I’m warm. I move up gradually before the Air Force hill and am in the front five riders. The Air Force hill doesn’t seem as tough this year. I just put it in the small chain ring and do a higher cadence, staying around 17mph. The descent, however, is curvy and dangerous, because it’s hard to decide whether to keep it at 40mph when the circuit narrows and you pass a bunch of unpredictable riders going 20.

At this stage, along with three other guys, I somehow gap the peloton and gain some serious time (is there an accident behind us on the descent?). It’s just us for the three miles into Crystal City. The announcer calls us the “chase group” as we race through the start/finish line, but I don’t know what that means. One rider says there’s a single breakaway rider out front, by 20 seconds. So we resolve to pull him back. This is not especially in my strategy, but we start pushing the pace in a rotating pace line of three (this ends up being my fastest lap at 23.7mph). Apparently he doesn’t like my style, and yells “Man, don’t you know how to do a pace line?” Sorry, I meekly respond.

Moments later, on the narrow northern stretch of 110, I almost hit a displaced orange cone, swerving left (into oncoming bike traffic) to miss it. The guy behind me hits it squarely, stays up, but the cone spikes up and smacks my nemesis in the face. (We chat about this amicably during a subsequent lap).

The cone incident puts me alone in 2nd place. But I don’t have a clear idea of how far back I am, so I sit up, soft pedal, and wait for a minute for the peloton to catch me. It’s about the 24 mile mark.

Laps 3-5 are routine. There are some strong guys taking long pulls, including a new friend Greg Butler. I eat and drink attentively. I’m focused on the wheel in front of me and not getting in trouble. The peloton is working well together: indicating road hazards, doing all the hand signals, slowing down when we get to accidents. These guys know what they’re doing.

At about the 8-mile mark of every loop, there’s a long gradual 1% downhill and then a sharp 3% uphill as you cross a bridge and drop into Crystal City. It’s typical for the speed to inch up to 30mph, and then slow down to 15mph in the span of les than 20 seconds. Here toward the end of lap 5, at about the 43-mile mark, a rider attempts a break. He gets maybe 10 seconds on us, but we gradually reel him back before the start/finish line.

But this is all the inspiration I need for when to attack!

It’s lap 6, and the gamesmanship begins. The pace slows considerably after the halfway point, and nobody wants to pull. Somewhere in the middle, we finally swallow up the sole breakaway, a super strong cyclist named Tim—he’s been out front by himself for 2 hours! By the Air Force Hill, I’m at the front and get some energy when I see my wife and daughter cheering! I wanted to take the descent first to stay out of trouble. That’s because last year, I got gapped by Jay Stanley here (who went on to win), trapped behind a super slow group. I didn’t want that to happen again.

On the approach to Crystal City, we’re averaging maybe 20 mph (where we’d done 26+ before). I see the bridge about a half-mile in the distance. That’s my cue. I take a swig of water, then use the rest of it to spray my head and try and cool down.

Bam! I make my move, pushing it to about 35 mph on the gradual downhill. I hit the uphill hard, try to maintain as much speed as possible, and enter Crystal City still ahead, yelling “on your left” like a banshee.

Now, the road here is so torn up that even the pros actually complained about the potholes! There are tons of riders, and I’m winding around them willy-nilly. As I make the right turn onto Crystal Drive, I catch a glimpse back over my shoulder—my move has broken up the peloton. There’s a string of 5-6 riders behind me. I don’t look again. I’m getting dog tired, but just push it as hard as I can the final quarter mile or so.

I cross the finish line first, which is kind of a new and amazing feeling. I sit up and try to catch my breath. A few seconds later, Greg rides up (I note he’s not breathing that hard!) and says, “we’re doing one more” . . . UGH!! I’m so dead after that sprint! Had I miscounted?

This is definitely my low point. I’m out of breath, out of water, and the peloton is down to only five guys, so it’s gonna be harder to hide. I just catch a wheel and determine not to drop off. At this point, I honestly am confused and still don’t know if I’ve done 5 laps or 6 (the discrepancy with the loop length, and the math involved doesn’t help!). When it’s my turn to pull, I demur, and go straight to the back.

The first half of this lap is a total blur. One guy falls off the pace. Then another. Then Greg signals me as if to say, “I’m dropping back.” Now it’s just Tim and me.

To be fair, Tim Kelley is a better cyclist than me. His name is all over Strava and he’s clearly a beast. His first lap was the single fastest lap of anybody in the Challenge Ride, averaging 24.7mph—a minute faster than my fastest lap. However, I know that he decided to test himself with a solo breakaway for more than two hours, which means he’s tired.

Tim’s not too troubled that I suck his wheel for the final 4 miles, nor that I jump him with about 300m to go. I round the final curve in full sprint mode, determined to give it my all. And then! I hit a pothole and drop my chain from big to small. While I’m struggling to put it back, he passes me. I get back in gear and struggle to catch him . . . finishing in a dead heat!

We congratulate each other, and I seek out my friends. When I see the results Monday, my time is about 5 seconds ahead of Tim’s. I know it’s not a legit categorized bike race, but it was loads of fun!