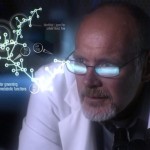 They say there’s freedom in structure. But how do you tell a story that spans 20 years in a traditional 60-second commercial spot? That was my challenge when Paul McKellips, President of FBR Media, asked me to direct “Saving Sally.” McKellips wanted to show the research and development that goes into developing life-saving medicine, with a focus on the people it saves.

First, I wrote the script with McKellips, who in a former life was a successful film and TV director and producer. Working with him went really smooth.

Visually, my solution was to shoot the spot with two distinct looks: For the bookend scenes with Sally’s family in the hospital room, I wanted to go more realistic and handheld. For the flashback to the years of discovery and progress, I’d do a dreamlike blue, exclusively dolly.

I also wanted to find a way to use visual FX during the compressed flashback scenes to convey complexity and chronology. The FX would be a secondary storyline. I knew the viewer wouldn’t be able to process all the FX in one pass, but that was kind of the point—there’s a lot that goes into developing medicine.

Then I storyboarded with my friend, Director of Photography Doug Gritzmacher. He did an amazing job visualizing all the scenes in advance—so we could think about how to integrate the visual FX in post.

In post, “Saving Sally” came alive. It was my first time collaborating with the insanely talented Peter Von Elling, whose visual FX wizardry exceeded my expectations.

As a documentary filmmaker, I tend to work on small teams. On location, there’s a lot more concern with reality — however that’s defined. When I’m director/camera on documentary shoots, I follow the action, concerned with emotion, interaction, human feelings. On the “Saving Sally” shoot, I spent days in advance working with a pretty big crew to ensure that we could conjure up emotion on set. It’s a big difference.

On the day of the shoot, I left Washington, D.C. behind and went to Maryland. Line Producer Kurt Uebersax ran the set like a well-oiled machine. Carl Glorioso, director of the Frederick Film Office, hooked us up with an ideal location at Frederick Memorial Hospital—where we staged some incredibly realistic scenes without trucking in a boatload of extra props.

I knew it was going to be tight—9 scenes in a 12-hour day. With about 20 actors and scenes on three hospital floors, we were moving fast. But it was 10pm and I still had two scenes to shoot, with some serious overtime charges looming—for actors, hospital, etc, if we didn’t wrap soon. I was exhausted and my creative synapses weren’t firing (despite a fourth cup of coffee!). But Gritzmacher (and Gaffer Chris Walter) actually accelerated the pace. I got everything I needed.

In post, “Saving Sally” came alive. It was my first time collaborating with the insanely talented Peter Von Elling, whose visual FX wizardry exceeded my expectations.

Much of my work over the years has been documentary, where you get more time to let events unfold, and time to tell the tale. But this year I’ve been directing more commercials, where every second counts. I’m lucky to have established my video production company in Washington, D.C., where there are really so many talented people working in the business. They really helped “Saving Sally” come alive!