Directing in Kenya, Distributing in Tokyo 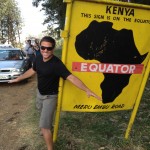 Nairobi’s Westgate mall terror had not yet seized headlines when I left Washington, D.C. to direct and shoot a short documentary there. While I’ve been all over central Africa, it was my first time in Kenya. I stayed at the Nairobi Fairmont, which had all the old-world charm of a century-old safari hotel, as well as a dash of unsettling colonial vibe.

The DC-based World Bank Group has sent me to a lot of countries in the past few years to document what it’s doing on the ground. You can take issue with how successful the institution’s been in some countries or some sectors, but I like what I’ve seen. Lately, I’ve been serving as director, shooter, editor — and I’ll usually work with a DC-based producer and a unit producer in the field.

This time, it’s the Inclusive Business unit of the IFC, or International Finance Corporation—that has me in Meru, Kenya on a coffee farm. When we get there, our coffee farmer is nowhere to be found. We scramble to find a replacement. Soon, I find myself filming a day in the life of Cyrus Kinote, his wife Rhoda Nkirote, and their two darling children.

I direct and shoot, and enjoy working with IFC producer Marcus Watson, who has a good eye. I know this will be more believable if we let Kinote tell his own story, documentary style. I also want the visuals to show his agency and dynamism. So many development videos are bad because they have top-down narration and don’t really give space for the voices of the poor. I resolve to do better. Today, I want to film how Kinote earns a living, spends time with his family, and collaborates with his colleagues. I want to do it all from his point of view. In so doing, I hope the viewer might empathize with Kinote, and care that his life has improved.

Today, I want to film how Kinote earns a living, spends time with his family, and collaborates with his colleagues. I want to do it all from his point of view.

They say that working with animals or children can double production time. On Kinote’s farm, this definitely holds true. Kinote’s cows are lowing like it’s their job, perpetually interrupting the master interview! Finally, Kinote throws some extra food in the stall, and we buy ourselves a window of time.

Late in the day, I film a series of shots with the GoPro, where I affix the little POV camera all over the place: in a coffee tree, a pile of coffee berries, and a wheelbarrow—even around Kinote’s chest. The end result appears as a short montage starting at 2:29.

We did the interview in Kinote’s native Kikuyu. Back in Washington, DC, I edit the story and dub in English. It turns out that the IFC also wants a version to show to some important stakeholders in Tokyo, so I master a second version with Japanese subtitles.

For me, it’s a first: from Meru to English to Japanese!

One thought on “Directing in Kenya, Distributing in Tokyo”