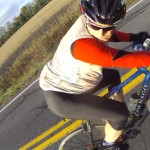 I didn’t name it, but it’s spot on. The “OMG WTF” ride is the hardest ride I’ve ever done. It chewed me up and spit me out; put me between two pieces of white bread, and served me for school lunch. I went riding recently with a few cycling friends: Bill Berlin, Jay Stanley, and Bill Murray. We leave Arlington at 6am to miss Beltway traffic, and start pedaling around 7:30 from Frederick, MD.

It‘s my first time to tackle this route, which seems to have been designed for maximum elevation and suffering. It’s a figure-8 in and out of Gambrill State Park on Catoctin Mountain. With at least four categorized climbs (Cat-3), it’s a legit test. Lots of quality cyclists seem to come here: on Strava, 467 cyclists have ridden the first mountain climb, for example, over 1,400 times.

The next 15 miles or so are no picnic, to be sure, but they’re rollers and fun. It’s a beautiful Autumn day, with the sun streaking through the trees. Unfortunately, the crosswind is unpredictable and strong. It gusts upwards of 15-17 mph. Fortunately, most of the climbs are protected, narrow roads. But some of the open descents are too windy.

Part of the pain is that you’ve already done 57 miles and climbed more than 5,000 feet when Coxey smacks you in the face.

Middlepoint Road starts to wind upwards at the 35 mile point. Having not ridden much the previous two months, I was dreading this. It’s 1.8 miles long, with 740 ft of elevation gain (with an even higher 7.3% average grade). I’m just trying to survive.

Jay is talking about how Coxey Brown is the hardest hill he’s ever done, and I just want to get it over with. Part of the pain is that you’ve already done 57 miles and climbed more than 5,000 feet when Coxey smacks you in the face. It’s insane: 1.9 miles long, with 1,024 ft of elevation gain, and 9.6% average grade. No rest for the weary!

Midway through Coxey, I feel like it’s my first day ever on a bike. It’s a old, narrow one-lane road, with odd off-camber turns and cracked asphalt. It’s not even 60 degrees this afternoon, but I’ve unzipped both my jacket and cycling shirt as far as they’ll go. It takes me 24 minutes to reach the top—at a paltry average speed of 5.3 mph!

When you suffer like this, you do things to survive. From the get-go on Coxey, I pull out a shameless maneuver: the paperboy. You know, riding far left and far right, just to manage the slope and stay on the machine. Far in front of me, Bill Berlin is pushing his Trek straight up Coxey. Respect!

Coxey has claimed another victim, but today it’s not me. Torquing up the extreme grades, Jay busts his hub. He ends up running up the hills next to his bike, then gliding down them—covering 6miles this way until we pick him up on the way back to Washington, D.C.

OMG WTF. If you’re ready to test yourself, do it. It’s a helluva ride.