Home » Blog » Mandela, Cameroon, and me

Mandela, Cameroon, and me 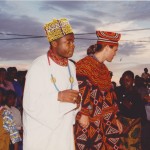 When I arrived in Yaoundé, Cameroon on September 15, 1994 for a scholarship year, His Excellency Nelson Rolihlahla Mandela had been President for four months. As South Africa’s first black President, Mandela finally possessed a political power on a national stage to match his outsized moral authority.

I was grappling with how to fit in a completely different culture. My French was pretty good, but there was a lot of Cameroonian slang. I’d jump in a taxi, tell the taximan “Poste Centrale,” pay my 100 CFA (18 cents), and then amble through downtown Yaoundé. I was the only white person for thousands and thousands and thousands of people. Everywhere I walked, children stared. Adults took note.

It was a shock.

Meanwhile, everybody wanted to talk about Mandela. Cameroonians had followed his story as much or more than we Americans. After 27 years in prison, would he choose vengeance and spite? Or would he work for hope, reconciliation, and nation-building?

After a month of trying to find my feet, I felt really at home in Cameroon. I started dreaming in French. I had new friends at the University, and was taking lessons on a traditional instrument, the “mvet,” from a local master, Noah Ondongo Generaud. I was forging what would become a life-long friendship with my housemate, Jean Paul Fosso.

As minorities go, I was privileged. My US passport gave me a freedom few people around me had. My bank account distinguished me from the masses. Even the color of my skin got me invitations to parties, and seats up front, near Ambassadors and the elite.

But there was a flip side. It’s strange not to be in the majority—to be a token, different, stared at for something so superficial as the color of your skin. The psycho-social effects of being a minority left a residue.

Today when I think of Mandela, I think of my year in Cameroon. The two are linked for me. I think of how Mandela influenced a continent even as he set an example for the world.

I think of life in Cameroon, my friends, and their lives there. Their enduring challenges are like those people face in the townships of South Africa.

I think of injustice and how people confront it: how people battle for progress on issues they care deeply about . . . climate change, gun safety, and gender equality.

I think my friend Vincent Pan, who today is in his 11th day of fasting for Immigration Reform. I think of Americans like him, who work in the spirit of Mandela. I think of how much I admire them.

I think of my democracy, which is slowly failing. Can Mandela’s example inspire Congress to pass laws that will give as many people as possible a leg up?

I think of my work as a filmmaker and how I might contribute better. I set out as a documentary filmmaker not only to try and entertain people, but also to change the world for the better. Looking back, Mandela took office 20 years ago. Looking forward, I’ll be 60 years old in 20 years . . . what can I do in that timeframe to make a difference?

Most of all, I think of Mandela himself—and the echoes of MLK and Gandhi. Had he chosen vengeance, we all would have understood. But he redefined justice. He elevated a people, and inspired the world. And me.