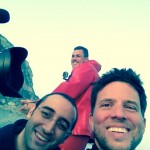 Beirut is a complete blast. The people are dynamic, the food crazy good, and in a week I’m all over the country, from the Syrian border in the north to close to Israel in the south. Here’s five things I learned during my film shoot in Lebanon.

1. Beirut’s got an image problem

When I told friends I was going to Beirut, all conversations and Facebook comments were variations on “be safe, be careful.” Some mentioned Hezbollah. Most focused on the Syrian civil war, which has already sent almost a million refugees into Lebanon (a small country of only 4 million that is ill-equipped to welcome so many people.)

Turns out, concerns aren’t overblown. The night I arrive, police stop me for more than an hour near my hotel. They don’t like my camera equipment (it doesn’t help that the hotel is catty-corner to Parliament!) My taxi driver has a soccer ball, so we juggle on the cobblestones while Mr. Police speaks, at length, on his iPhone. No dice. Ultimately, my hosts book me in a less sensitive accommodation. Aaaah, sweet sleep.

2. Dynamic and cool, the Lebanese carry on

The first day of shooting goes according to plan.

That literally is the most beautiful sentence you can write if you’re a filmmaker abroad.

This is 100% due to my team in Beirut, the all-Lebanese staff of the USAID-funded Lebanese Investment in Microfinance project. All logistics, scheduling, transport, and access issues are worked out in advance. Thanks Khalil, Carla, Mahmoud, Moussa, Liliane!

Here’s a few things I hear throughout the day—the likes of which don’t float around the local Whole Foods back home: “We had our own civil war for 20 years, and we didn’t all go running into other countries!” . . . “The refugees get a stipend at the border. Then they accept lower pay in our jobs. Our young men can’t compete!” . . . “Yes, there are bombs. But we go out almost every night: if you die, you die.”

Day one’s a wrap. I’m impressed at the work ethic and efficiency of my team. I’m also surprised by how sanguine people remain despite the dicey security situation.

Dynamic and cool, the Lebanese carry on.

3. Fishing is an endurance sport

I don’t get to sleep until past 3am. I hate my 4am wake-up call. I despise the 4:45am pick-up. It’s still pitch black as we drive up the coast to the tiny fishing village of El Beddaoui, in Chekka.

What I don’t know is that we’re less than an hour from the Syrian border. And minutes from the sectarian violence in Tripoli—where we’ll go before lunch.

Rabih is a fisherman. He’s been on the water since 3am setting his nets. He bought his used boat and nets with a microfinance loan. Today, he work for himself and not for the man. It’s changed his family’s life, and I’m here to tell that story.

It’s the pre-dawn blue hour as I step on the boat. Here, at the dock, the water is serene, but soon in the open Mediterranean, the waves knock me around. I’m filming with the Canon 5D Mark 3, with the 16-35mm lens on a Manfrotto monopod—small, lightweight, great in low light.

“Rabih can’t stop smiling. After all, it’s his boat, his nets, and he’s making a better living now.”

As the sun rises, Rabih stands heroically above the horizon. The work is grueling, as he pulls up the thousands of yards of nets by hand, fish entwined, balled up in baskets on deck.

After two hours at sea, I shoot some b-roll around town, rejoin Rabih at the fish market in Tripoli (no issues), hang out with his family at home, then return to port where he’s prepping to head out to sea again.

I’m exhausted, but Rabih can’t stop smiling. After all, it’s his boat, his nets, and he’s making a better living now.

My second day of filming I spend on a cattle farm in Bekaa with Samir. He’s bought 10 heads of cattle over several years thanks to three successively larger microfinance loans, and expanded his business considerably.

Working around all that cattle dung inspired a terrible hunger, so Khalil recommends one of his favorites: Barbar Shawarma, which is located in Corniche, a seaside promenade in Beirut’s central district.

First, Khalil. This guy is really the project’s M&E Coordinator, but this week, he’s my extremely capable Unit Producer and translator. He gets along extremely well with everybody we work with across the country, and we never have a problem.

And as the week unfolds, he’s also acting food critic and cinema aficionado, since he can’t stop reciting the closing scene in Avengers, where Robert Downey, Jr.’s Iron Man crashes to Earth, opens his weary eyes, and says, “You ever tried Shawarma? There’s a shawarma joint about two blocks from here. I don’t know what it is, but I wanna try it.” (Back story on that revised ending on Entertainment Weekly).

The rest of the film shoot takes me to five of Lebanon’s six Governorates (or provinces). I’m deep in Hezbollah country, where billboards of the Ayatollah Khomeini share real estate with ads for Pepsi and designer watches. And by Friday, I have more than enough quality footage to cut four short films.

Saturday is a day off. What’s brilliant is that long-time friends Stefano and Margherita live and work in Tyre, about an hour south. They pick me up and we drive up the coast to Byblos. It’s a respite, a quiet tourist town, and irresistibly photogenic. You’d think on my day off, I wouldn’t touch a camera, but the light was beautiful and I took 50+ photos . . . on my iPhone! Oh, and Byblos is a UNESCO world heritage site.

It’s a perfect way to close out a great week, where I feel good about the footage I captured and learned a lot about the culture and people of Lebanon.