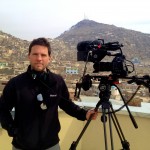 I just wrapped a three-country shoot—in Lebanon, Afghanistan, and Ethiopia—using my new Canon C100 rig for the first time, so I wanted to report on the pros and cons.

When I first considered the C100, I wanted the beautiful pictures that my Canon 5D Mark III gives, while addressing the 5D’s main limitations: no sync sound, not good handheld (too shaky), no built-in ND, and short record times.

Putting together the kit

But currently my business is more documentary stuff, where I direct, produce, and frequently (but not always) shoot. At this point of my career, I can’t bill top dollar for my camera like a dedicated commercial DP might.

So while a lot of my friends are investing in the C300, it was off the table for me (at $14k for the body alone). The more I researched and talked with friends, the more I realized I’d need a ton of accessories to make the C100 operational. I got some good advice from Brooklyn-based DP/Producer Cameron Hickey. And fortunately, I worked with Jessica at Abel Cine to put it together (full rig specs below). Full price tag was around $9k.

When I travel, I break down the C100 rig to its 23 (!!) component parts. The first few times I put it together, it took forever. These days, it takes about 15 minutes. I keep it assembled the entire shoot.

I shot for five days each in Lebanon, Afghanistan, and Ethiopia—three very different places. I definitely grew more accustomed every day, and am happy with the quality of its pictures at a good value—with one glaring exception, as I’ll describe below.

Here’s an interview set up in Kabul (and a still of the resulting footage) and an interview set-up in Addis Ababa. I was happy with what the C100 (and 2.8 lens) did. In Addis, we were shooting at a textile factory, where every indoor location was loud with people and machines, and every outdoor location was loud with traffic from the nearby highway. The only quiet space was the storage warehouse. I used natural light for the key and reflected back gold. It turned out great!

So, with no attempt to be official, here are some first impressions.

Image quality: The clear winning edge is the pictures. I’m happy with the final product.

Upgrades from 5D: The sync sound, built-in ND, and longer record times were super easy and worked like they should. It’s great to upgrade from the 5D’s limitations! With my external recorder, I’m getting 4 hours of ProRes footage on one SSD. I brought a second SSD, but never needed it. The rig rests on my shoulder like a regular ENG camera. It’s comfortable, but heavy. I’m pleased with how stable the pictures are, even when I zoom.

Ergonomics: The good. Canon’s put most of the buttons where they’re easy to locate without looking. With my right pointer finger: record, aperture, and ISO. When it’s time to make more drastic changes (ND filter, white balance), I can hold the rig with my right hand on the Zacuto ENG grip relocator and adjust stuff with my left hand.

The glaring exception to all this good stuff is the interface between the C100 and the Atomos Samurai. I’m currently using the Samurai not only as a recorder, but also as a high-resolution monitor (1280×720, 5″).

The visibility is great about 90% of the time for me . . . until you’re in full sunlight. Then it’s just really tough to see. I struggled with this.

The ergonomics can be miserable. I have it connected via the Noga Cine Arm. The Samurai can get loose and rotate around on me at the most inopportune times. I like to jump on tables or crawl on the floor to try and get a good shot, so I regularly put some good torque on the Samurai that the Cine Arm sometimes couldn’t handle.

Also, the 3:2 pulldown can be hairy. For the first week, I didn’t understand it and kept getting crappy interlaced footage. Finally, I read the manual (duh!) and realized I’d been doing it wrong.

So, I’m in love-hate with my new C100 rig. During every shoot day, I’m 95% happy with the thing, but if you catch me in full sunlight or when the Samurai recorder is not cooperating, I hope you don’t catch what I’m muttering under my breath!

Then when I get back to the computer and see the pictures, I’m back in love again. . .  In this business, like so many, there’s give and take. And  I’m getting 4 hours of nonstop ProRez footage with a great Canon codec at less than $10k.

In terms of being a full-proof run-and-gun documentary camera, my C100 rig is not quite there. I’m hoping that with more practice on it — and perhaps an alternate solution for the Samurai — it will be everything I hoped for.

I started in  documentary film  as a director/producer and have kicking-and-screaming learned all the technical stuff that makes a shooter competent. The C100 has been no exception for me. It’s been a lot of research and conversations and practice.

So, here’s a list of what I’m using and a link to where I bought it. If I can help one person cut the time in half that it took me to figure this stuff out, it’ll be worth it.

If you found this useful, let me know! Thanks for reading!