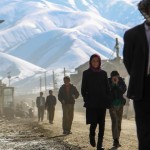 As I take my first steps on Afghan soil for a 10-day film shoot, I can’t shake the knowledge that the Taliban just launched their spring offensive.

I’m walking the gauntlet, a no-man’s-land, since Kabul airport doesn’t seem to permit cars anywhere near it (fewer bomb threats?). So under an intense sun, I push my cart stacked with video equipment for four city blocks to an awaiting armored SUV.

I move into what people call a villa, but what’s really a walled compound. Like a prison. It has 10 armed guards on duty at any one time—a UK ex-special forces type and nine locals. When I go out, it’s in an “armored” with an armed guard. We get security briefings every morning, don’t leave the villa except to work, and return home before nightfall.

My friend Joe, a USAID veteran, skypes me several times from the States—most likely to give me a pep talk . But I don’t answer. For some reason, I don’t want any more context than what I have in front of my own two eyes. It’s verging on overwhelming.

“[A]pproaching a checkpoint outside of Kabul, a soldier bangs violently on our window. We stop. My heart’s pounding.”

My job is to make some short documentaries about a successful USDA project, CBCMP, that is improving how the Afghan Ministry of Agriculture functions. It’s a capacity building project. In a country where more than 70% of the population derives some or all of their income from the agricultural sector, it’s important work. If farmers are more successful, the thinking goes, there’ll be less poverty, less opium, and perhaps a weaker Taliban.

Editor’s note: Check out the final videos in this YouTube playlist, “Afghanistan: Agricultural Capacity for USDA and IESC”

The first shoot day, I can barely open the SUV door it’s so heavy (bullet-proof glass, armor). Kabul is crowded, dry as dirt, and framed by the most imposing snow-capped mountains I’ve ever seen. Hardscrabble stone homes, etched into the mountainsides, snake to impossible heights—overshadowing my memories of Rio’s favelas (my blog post from Brazil).

I run all the creative—directing, shooting, audio, and lights. I have a series of young men serve as my unit producers, ushering me around, asking questions in interviews, and making sure I don’t commit any cultural gaffes (“don’t look at any women,” one says the first day). They are smart, dress in Western clothes, and I get along well with all of them, especially Najib Siawash.

Interviews are in English or Dari. I’ve just conducted a bunch of Arabic interviews in Lebanon (Beirut Dispatch: 5 Things I Learned in Lebanon) and will soon head off to Ethiopia where we’ll do Amharic. I start reflecting on all the interesting languages I’ve filmed recently: Meru in Kenya (Directing in Kenya . . .), Russian and Azeri in Azerbaijan, Tagalog in the Philippines, and lots of Spanish.

I think about how I love the documentary process, how at its best it can be respectful and authentic. I think about how in the edit, I’ll use people’s voices rather than narration or dubbing, and how this makes all the difference.

After a few days, I’m fed up with filming government workers in government buildings, so I insist (again) on a day filming some farmers. With the security situation, it takes an act of Congress to find common ground between the local Deputy Chief of Party (“let’s go to Jalalabad!”) and the hardcore UK special forces guy (who prohibits travel anywhere).

So the next day we set off for some farms on the outskirts of Kabul. Looking around on the drive, I never get over how men dominate every public space. It’s like aliens abducted the women. In some commercial districts, we pass literally thousands upon thousands of men and boys, without seeing more than a handful of women.

For the next week, I have a dozen conversations with both locals and expat aid workers about the absence of women in the public sphere. It’s like I’m obsessed the way I keep bringing it up, but I do a good job being sensitive and listening. I never can escape a deep conviction that half of the population is being shut out of jobs, opportunity, and personal liberty.

So I film some women farmers, some of whom are wearing a blue full-body chador, or burqua. Afterwards, Najib takes my iPhone and starts snapping, including this odd video:

On the way back, approaching a checkpoint outside of Kabul, a soldier bangs violently on our window. We stop. My heart’s pounding. I have my camera rig on my lap and a hundred scenarios run through my mind, the least of which is the camera get confiscated.

I never get over how men dominate every public space. It’s like aliens abducted the women.

The driver unlocks the doors. The military guy sticks his face in the back seat, two inches from mine . . . and breaks into a huge smile. He leans back a touch, and over his rifle, he stretches out his right hand. Before I realize it, I’m grasping it in in a big friendly handshake. The soldier breaks out in his native Dari, then as quick as he appeared, he’s gone.

Najib translate: “Sorry to stop you, I thought you were my friend!”

Apparently, I look like Afghans who come from the Panjshir Province. What’s more, Afghanistan’s greatest national hero, Massoud, the “Lion of Panjshir” hails from there. He was assassinated two days before 9/11, and he is celebrated here on a national holiday called “Massoud Day.”

Now that I’m home, I follow the news with renewed interest. Today, the Tailban attacked an election office. Last week, gunmen indiscriminately shot women and children at the Serena Hotel. I hope against hope that next week’s election will go off peacefully, bringing to power a new President who can quell the violence and move Afghanistan in the right direction.