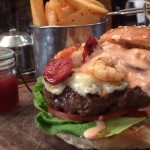 This shrimp chorizo burger in Hong Kong’s K-Town Bar and Grill in Kennedy Town was $28. Yowza!

I’m used to traveling the world to make videos for international development organizations, but this time around I’m in one of the most expensive cities around. I’m here to direct and produce an episode for a series on the new Red Bull Channel, hired by Story House, a production company with offices in Berlin, Halifax, and Washington, D.C.

On the team are DP Paul McCurdy, who’s wielding the C300 and a Red Epic on the Ronin for slow-motion. Our soundman is Mark Roberts, who’s on top of everything and nice to boot. When David Chung is not fixing for us, he runs his own local production company, Lemonade and Giggles. David captured this:

We get a lot of coverage on our first day. In addition to directing, I’m also running second camera. I’ve been trying to get better at the Glidecam, and I was really happy with it today. It gave me a lot of options for smoothly following the action. And when I needed to lock down or get a stable interview, I just set it down or balanced it on my belt. Here’s a little clip following our protagonists down some windy stairs and along a sidewalk — something that would have been too bouncy to even consider trying without the Glidecam. Check out the banyan tree roots that stretch for 40 or 50 feet down the sheer rock wall. Amazing!

I’m interested in experimenting with the Glidecam in other situations where you’d never dare filming on the move. Like following trail runners bouldering over the rocky Billy Goat Trail in DC, or other outdoor stuff.

I’m not sure if Red Bull will become the new ESPN, but this story’s going to be a good one!

One thought on “Directing for Red Bull in Hong Kong”