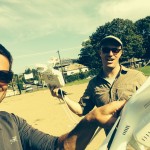 I’ve flown the Phantom 2 Vision + in some historical, challenging, and fun locations during the last two months. I wanted to report what I learned—including one harrowing mission in the old-growth forests of Portland, Oregon.

Dorst MediaWorks is a video production company in Washington, D.C.  but our clients often send us around the country and internationally as well. So far, the Phantom is delivering on its promise to capture smooth shots that amps up the production values of our work!

First, I’ll cut to the chase. For the price, the Phantom 2 is a great value. It’s about $1,500 once you get a pelican case and a few extra batteries. Buy it, you’ll pay it off in one or two gigs.

I got the Phantom 1 when it came out a few years ago. I flew it a lot, and got the hang of it. Then I mounted a GoPro on it. But my footage was never good enough to include in a broadcast. It wasn’t ready for prime time.

But give credit to DJI. They improved the Phantom 2 Vision + in several major ways: (1) The 3-axis gimbal makes for very smooth footage; (2) the integrated camera keeps it simple; (3) the new and improved battery lasts longer (only count on 20 minutes rather than the advertised 25); and (4) the DJI Vision app allows you to watch what you’re filming on your iPhone (mounted on the included smartphone holder). You can also adjust the angle of the camera mid-flight!

In mid-September, I landed in Miami to direct a shoot for the new Red Bull Channel. Because our flight was delayed, I didn’t arrive in Key West until around 2am. The next morning, our call time was 6am, and my soundman handed me a new Phantom 2 box. In this sleep-deprived state, I put together the copter on set.

I was scared out of my mind of crashing the copter within the first few minutes in the Atlantic, but somehow I kept it dry and out of trouble and captured a few establishing aerial shots for the show:

The next week, Story House Production hired me to DP a shoot for PBS in Jamestown, Virginia. The fascinating thing about the documentary is that recent forensic archeology suggests cannibalism took place here during a particularly desperate winter in America’s earliest settlement.

A week later, I got the call by Red Bull to do another show in Portland, Oregon. This time, I’d be following an extreme arborist, who does his thing hundreds of feet in the air.

We trekked into Portland’s Audubon Sanctuary, which has some tremendous old-growth trees. We wanted to show what an expert tree climber this guy is and how he spans from tree to tree in the canopy! The problem running a copter here is that it’s so dense that you can’t get a single satellite—much less the six that the Phantom requires to fly steadily!

For the first two hours, we captured footage with our A-Camera and the GoPros. I was trying to convince myself we’d get enough coverage without the copter. After all, there was only an extremely tiny window of opportunity to take the copter up to the 250-foot level above the trees. I’d have to launch it without satellites, through a 10-foot opening. If I failed, the copter would crash and die. But without the footage canpoy footage, we wouldn’t have a full visual story. . .

Last week, I was in Hong Kong, and captured some stuff there. Just like the trees in Portland, the skyscrapers interrupted the satellite coverage. Only when I got the Phantom up to about 15 stories did it stop acting whacky and start to triangulate the satellite signals. This was something I learned—rarely am I flying in an open field. And when you’re flying the Phantom around obstacles, it pays to be careful.

Keep the copter alive to live to fly another day!