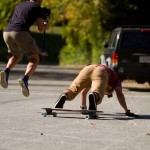 This is a behind-the-scenes post for a pro bono video I recently made. It was a total blast! All the boarders I met were really cool. And it was for a good cause. Check it out:

One of my good friends is Colin Brown. His son, Kaelen, is a junior in high school. Kaelen’s the lead singer and guitarist for the band Red Light Distraction and is an avid longboarder. When Kaelen told me he and friends Jake Muskovitz and Cole Trudo were organizing a longboard jam to raise money for charity, I was impressed and said I’d make a video for them.

I drew in Mark Devito, Executive Creative Director of local boutique agency Gigawatt Group, to produce. Mark hires me to direct commercials for some outdoor, active lifestyle, and sports accounts he has, so I knew he’d be stoked. Then we asked Rob Bellon to work second camera.

When I got there Saturday morning, the long, sloping road in front of the Czech Embassy in northwest Washington, D.C. was already swarming with teenagers. Half of them were wearing Halloween costumes – I’d forgotten that this was one of the (loosely enforced) entry requirements!

While unpacking my gear, I heard a few people mentioning “Red Bull guy.” Then a minute later, I heard it again. Soon, I realized they were talking about me! I’d mentioned to Kaelen that I was headed to Hong Kong on a shoot for the Red Bull channel — and suddenly, I’m “the Red Bull guy!” (read my post from Hong Kong. Sorry to disappoint, but I’m just an indie freelance filmmaker!)

I brought my C100 outfitted with an external ProRez Atomos Samurai Blade to capture some establishing shots. Rob had his GH4, and I asked him to float around the finish line where everybody was hanging out and capture reaction shots and cool details.  I ended up using a lot of Rob’s footage!

I was most excited to use my new Glidecam HD-4000 with my Canon 5Dm3. Having just binged on some stellar Devin Supertramp videos, I wanted to capture some fluid, moving shots where the guys were competing for longest slide.

For me the biggest question was, how would my new GoPro Hero4s perform? I’d just bought three of them for a shoot I had in Portland, Oregon, but I’d yet to take advantage of the 120 frames per second in 1080p.

As for the event, I was impressed with the organization and community. The Czech Embassy and neighbors didn’t seem to mind all the commotion. The 100+ longboarders were polite and shared the road when the odd driver or cyclist headed through.

Kaelen, Jake, and Cole ran a tight ship. They had tons of raffle prizes donated by all the big companies—Riptide, Loaded, Bustin, Muirskate, Rayne, and other companies listed at the end of the video. A bunch of the longboarders I talked with said it was the best-run jam they’d ever been to.

And the athleticism and technique were impressive—especially at the finish line, where these guys bombed down going 30 or 40 mph, then threw down into various heel side and toe side slides!

Check out this next clip: I actually jumped to avoid a slider (My bad, I got too close to the action!) But the glidecam kept the footage pretty smooth! 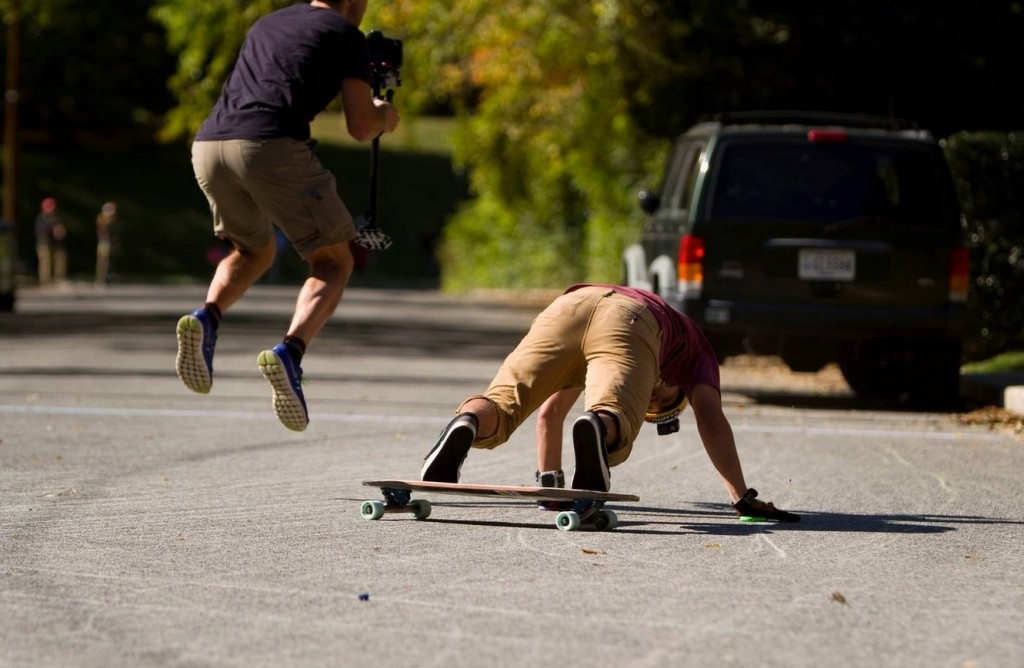 If you look close in the video above, you can see the DJI Phantom Vision flying. I’ve been doing a lot flying with the Phantom Vision 2 Plus lately, so got to talking with those guys (read my copter post here, with aerial footage from Virginia, Oregon, and Florida!).

How did the GoPros perform? I set all three of them to capture footage at 120fps 1080p, and gave them to different guys to see what we could capture. I actually mounted a flat adhesive mount flush on a board by screwing it into the housing. But that was too shaky. I also affixed the Jaws mount on the front lip of a board, but that was too shaky as well.

The positions that worked the best were the chesty mount, the tried-and-true helmet mount, the wrist mount, and my low-tech favorite . . . just having guys hold it in their hands (or with a pole) and point it at themselves.

One of the most talented boarders, J.D. Casada, captured the best footage, which worked really well at 120 fps. He’s the one featured for more than 30 seconds, from the 41-second mark.

Kaelen, Jake, and Cole say they’re going to organize another jam soon. Check out their Facebook page for the TML Halloween Charity Jam.

And let me know what you think about the video!