JOBS for G.I.s Now on DirecTV 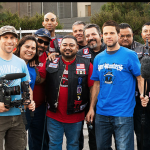 A year ago today, Doug Gritzmacher and I flew to Los Angeles to start pre-production on a documentary that we pre-sold to DirecTV. The idea: since 9/11, more than 2 million people have left the military. How are they doing re-integrating into civilian life?

That first whirlwind week we met with as many people as we could who were working on veterans affairs in Los Angeles. (We set the film there because the city has more veterans than any city in the nation; more homeless veterans; a Navy vet as a Mayor; and the city is the headquarters of DirecTV, so they liked that it was a “local” story.)

Over the subsequent six months, we returned to Los Angeles seven times. We followed a lot of transitioning service members, and ultimately settled on five, at least one from each branch.

Kudos to DirecTV, which gave us great latitude to tell the story we wanted to tell!

When JOBS FOR G.I.s premiered on DirecTV’s Audience Channel around Veterans Day in early November, I was elated. Mad props to my filmmaking partner, Doug Gritzmacher, who was a delight to work with. He does it all, from directing and shooting to editing and color correction. I hope we make many more documentaries together!

Long form is a grind. You don’t make much money. When you do it the way we prefer — more observational documentary — it takes time. And you’re not necessarily sure where the story is going or when it’s going to wrap up.

But that’s documentary. Thanks to Doreen, Aneika, Andy, Christian, and Alex who let us into their lives. Respect to the thousands of providers in the city of angels who are helping service members transition out. And thanks to our patriots who serve in our stead.

Making this film gave me a renewed appreciation for what you do.