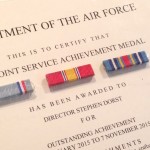 I’m honored to have received a Joint Service Achievement Medal” for “Outstanding “Achievement” for my recent documentary film, JOBS for G.I.s.

The honor was a complete surprise. Given by former Air Force officer, Aneika Solomon, who is one of the five transitioning service members we follow in the film, the award reads: “Director Stephen Dorst distinguished himself by outstanding craftsmanship as Director and Producer, Z-Channel Films, Washington D.C. by creating the documentary film, G.I. JOBS. While in collaboration with DirecTV and working alongside Producer and Director Doug Gritzmacher, Director Dorst’s keen perspective was instrumental in capturing and melding the stories of five veterans from the services of the Army, Air Force, Navy and the Marines.” 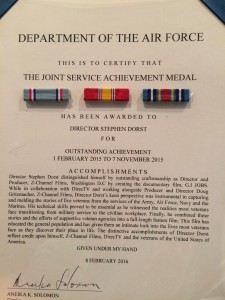 Aneika, like the other four people we follow, was brave to share her story with us. I hope this films helps all of us to pay more attention to this transition out of the service, which is such a critical juncture in the lives of millions of people. Too often, I think, people figure they do their part by clapping for the military at a baseball game or supporting Congressional increases in defense budget spending. But that doesn’t cut it.

We have to do a better job of making the transition work for more people. We need to target resources better for education, workforce training, and other support. If you own a company, you can help out by keeping an open mind and trying to interview former military for every position, not just the ones they’re stereotyped in. If you know somebody that served overseas, try to learn more about Iraq and Afghanistan so you can better appreciate what they went through.

At the policy level, we should all encourage the DOD to share more information with veteran service organizations (VSOs) at the city level. Too often, these VSOs want to help, but don’t find out about veterans in need until they’re already jobless, homeless, or worse.

When you empower veterans, you strengthen communities.

Doug and I went to Los Angeles six times during 2015 to film JOBS for G.I.s. Working with Doug as a two-man documentary film crew was a big pleasure: he’s super talented, with a great sense for story, and a strong eye. But we couldn’t have done it without the support of many organizations that are doing great work day in and day out:
Reboot
Vet Hunters
Salvation Army Haven
JVS Los Angeles
USC Center for Innovation and Research on Veterans & Military Families (CIR)
National Veterans Foundation
Weingart Center
Veterans in Film and TV
Silhouettes for Vets
New Directions
Goodwill Veterans Employment Program
Operation PAVE (Paralyzed Veterans of America)
LA County Dept of Military and Vet Affairs
Got Your 6

Doug and I are on the lookout for our next documentary topic. If you know of a great, inspiring story, let us know. If you are an Executive Producer-type, interested in funding great stories, reach out. We are always looking to expand our team.