When I touch down in Sarajevo for a film shoot for a World Bank Group project, I‘m mindful that this Olympic city suffered through the longest siege of a city in the history of modern warfare – 1,425 days long.

I’m here to make a video for an international development organization, but all I can think about is the Bosnian War, which ended 21 years ago. My driver, Chola, doesn’t have to point out the bullet holes pockmarking the exposed facades along the Miljacka River. When I learn he was Bosnian special forces, I imagine how these streets, for him, are more than just a vehicular grid. Buildings are tactical. They block artillery fire. Perhaps on this corner he lost a fellow soldier; or on that one, he returned fire.

Even two decades removed, how do you shake off war and just drive a car?

And how do you grow up in Yugoslavian brand of Communism, brave a four-year war, and then transition to capitalism on the margins of Europe?

This is running through my head as I load four pelican cases of video equipment in Chola’s car. Sarajevo has a long history as a cosmopolitan city, but post-war identity politics seem to be delaying the country’s pivot to Europe. It’s not like Bosnia isn’t capable. After all, in 1981, Sarajevo’s GDP was 133% the Yugoslav average. In 1984, it hosted the Winter Olympics. Moreover, during Communist days (pre-1992), Bosnia had a significant industrial base – all state-run of course. But since then, the country has had a hard time adapting to a market economy. 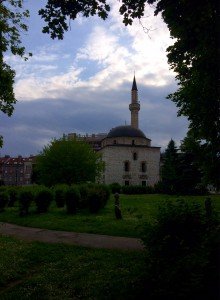 That’s why I’m here: to help with that transition. Dorst MediaWorks makes videos for international development organizations. The International Finance Corporation (IFC) hired me to chronicle a project of its Corporate Governance unit, which works with a local organization to help improve local companies’ corporate governance (Watch films I made for the same group in Colombia and Egypt).

What is corporate governance? It’s the processes and structures by which companies are directed and controlled. Here in Bosnia, most companies are young, family businesses. They lack formal structures, such as independent boards, defined succession planning, and other hallmarks of larger companies. As a result, they find it difficult to access capital and grow regionally and internationally.

We’re heading east of town now on a winding road to film a small-business owner. He’s operating out of the renovated site of a Bosnian weapons armory. Amila, a confident, bilingual staffer at the IFC is my Unit Producer for these three days. It’s May and it’s raining, and Amila calmly reconfigures our shooting schedule to accommodate my obsession with rare patches of sunshine.

We arrive at the business and I unpack. I’m excited to be using my new Sony FS7 abroad for the first time. I’m looking forward to putting it through its paces, and plan to do a full blog post later about how much I loved using it!

From a work perspective, my two days in Sarajevo and one day in Banja Luka are a success. 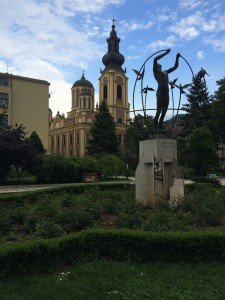 Personally, my absolute favorite part of my job is coming into contact with different cultures: meeting people, listening to their music, eating their food, learning about their hopes and fears, politics and history.

Sarajevo’s Old City is a joy. Much of it is a pedestrian zone, with small shops, ancient structures, a natural habitat for a coffee culture. I emerge at Vijecnica, which is both a library and City Hall. Fire-bombed by the Serbs during the war, it is recently rebuilt. Nearby, I stumble upon the Latin Bridge, where 102 years ago, a young Serb nationalist shot and killed Austrian Archduke Franz Ferdinand—and launched World War I. I meander up through parks and by mosques. Hungry, I stop for a hladno pivo (cold beer) and a cevapi (pita bread stuffed with grilled meat).

Back at my hotel, the day’s footage is definitely done cloning. It’s time to string out the interviews and upload an MP3 for the transcription service. I hope jet lag doesn’t keep me up too long tonight. And I’m praying for sunshine tomorrow.