Home » Blog » From Ryan Lochte to Ashton Eaton: 8 Things I Learned at the Olympics

From Ryan Lochte to Ashton Eaton: 8 Things I Learned at the Olympics

Until last month, my best Olympic memory was this: While in college in 1992 I traveled across Europe for a summer. In Barcelona, I splurged on Olympic track and field tickets for my 21st birthday. Sunshine, world-class runners, and … Evander Holyfield? What was he doing in the cheap seats? I have this enduring memory of sitting behind the boxing champ all day, surprised he had itty-bitty calves in comparison to his hulking upper body.

In my opinion, Brazil pulled it off. I had one of the best weeks of my life. Rio buzzed with Olympic spirit, and I saw Neymar, Simone Biles, Matthew Centrowitz and hundreds of other elite athletes doing what they do best.

The experience made me realize a few things along the way:

1. Make Up Your Own Mind

I arrived on high alert. How could I not? The negative news was relentless. I mean, just type “Rio Olympic problems” into Google and you get 26 million results: Zika, unsafe water, crime, corruption. Sure, Brazil was going through an unprecedented political crisis and their worst recession in a century. But, during my week in Rio, the Olympics went off great. Transportation was excellent. The metro was cleaner and faster than the DC metro in some cases. Volunteers were all over the place, affable and helpful. Crime wasn’t an issue, for me. Oh yeah, and nobody got Zika. Oops! Makes me wonder why our media was so down on Brazil. For me, it verged on some sort of implicit editorial prejudice against a poorer country. Journalists simply didn’t get the green light to expose London’s pockets of squalor and rampant inequality in 2012. But this year, they had free reign to hate on Rio. My take-away: be skeptical of what you read. And then make up your own mind.

2. Choose Your Corner: Lochte, Trump … or Not

On a daily basis, people wanted to engage with m on Trump. Not just Brazilians. Everybody. I don’t blame them. He’s fascinating, a Narcissistic blowhard without a censor mechanism. This was different than the years of Bush Junior, whom I felt I needed to defend to some degree, since dismissing him outright felt like dismissing American Democracy (since we voted him in twice and our Congress authorized the Iraq invasion). Trump ain’t elected. Yes, the Republican Party is broken for selecting him. No, he won’t be elected. No, he doesn’t represent America, our policies, our values. That felt great to say. Liberating. Now let’s go drink a beer.

But then Ryan Lochte happened. My first instinct was guilt. An American Abroad Behaving Badly. But then I had a Liberating Trump Moment. I don’t know Ryan Lochte. He doesn’t stand for me. In fact, he’s not representative of Americans abroad or American athletes at all. He’s one guy (here’s a complete timeline of Locate’s imaginative story). But he does have a supreme talent for accidental humor. 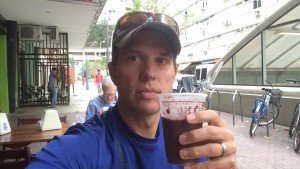 If I could snap my fingers and import one thing from Rio today, it would be Brazil’s culture of fresh fruit juice. Every morning, I bought an açai bowl from one of my favorite corner juice joints in Ipanema: Polis Sucos or Big Nectar. My favorite: acai, with banana, strawberry, and granola mixed in. Yes, the food was great. And I was fortunate to have several friends who live in Rio who took me to their favorite places and introduced me to all the local delights—churrasco, feijoada, moqueca do camarao—but my favorite: açai and the fruit juices!

At track and field, we had tickets up top. But the Brazilians weren’t checking tickets, so we wasted no time boogying down to ground level … about 10 rows behind a group of Olympic coaches. The men’s decathlon was in full swing, namely the discus. When
defending Gold Medalist Ashton Eaton walked over to us the first time, I could almost hear his conversation with Coach Harry Marra. Eaton listened intently. It was impressive. Here was the best athlete in the world—maybe the best decathlete in history—and he could have relied solely on experience, technique, or mental focus. But he chose to connect with his coach after every throw. It made him stronger.

5. Know the Rules of Your Game

That same morning, my heart sunk during the qualifying round of the Women’s 4x100m relay when Allyson Felix dropped the baton. Disqualified! I was crushed. What I didn’t know—and wouldn’t learn until dinner with friends later that night—was that she had been bumped by the Brazilian runner next to her. The team filed an appeal with the IAAF and got a second chance, qualifying for a chance to win the gold, which it did. Great summary here.

This one is more Brazil and less Olympics. Everywhere you go, commerce comes to you: on the beach, in the metro, at red lights. Men and women selling everything from candy bars to drinks to clothes—and all manner of random chochkies. Having lived in Cameroon, I got used to this sort of thing long ago. Here in Rio, the traveling salesmen weren’t aggressive. Yeah, there’s a lot of poverty in Brazil, but these people were doing their best to get ahead. They deserved as much respect as the guy with the desk job or the woman driving a bus. Did I want a tablecloth at the beach? No. But was I known to buy Kit Kats on the metro en route to Olympic events. Yes!

Golf is an Olympic newcomer. But apparently, golf’s elite didn’t get the memo. The top-4 golfers in the world—Rory McIlroy, Jason Day, Jordan Spieth, and Dustin Johnson didn’t go. And 8 of the top-20 golfers in the world didn’t think it was worth their time. Most cited 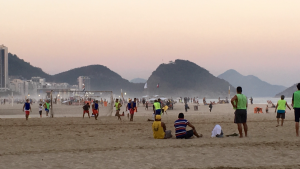 the “threat” of zika, but it was clear they didn’t respect the Olympics. Why should they? They get more money and prestige winning any number of other tournaments around the world: the British Open, the Masters, the US Open, and so on. At last May’s Players Championship, a golfer named Retief Goosen placed 15th and still earned $212,625. I propose that sports with mature, commercialized, global leagues—such as golf and tennis—take their Olympic cue from Men’s Soccer, which is largely an under-23 endeavor. That way, the Olympics can maintain its self-respect in every sport it allows in. The LA Times disagrees, but it doesn’t seem right when the best don’t come to play.

8. Run Your Own Race

It was a cool Saturday evening at the Olympic Stadium and I didn’t hold out much hope for Matthew Centrowitz. Sure, I saw the American 1,500m runner qualify during our Olympic Trials and vaguely knew he grew up somewhere near Washington, D.C. But Americans don’t win distance events, right? An American hadn’t won gold in the 1,500m since 1908. Yes, Centrowitz got 4th in London, but at the starting line Ethiopian and Kenya runners predominated, including Kenya’s Asbel Kiprop, the 2008 Olympic winner and Algeria’s Taoufik Makhloufi, the 2012 Olympic winner. The gun fires! The first lap is slow at 66 seconds. And the second lap is even slower at 70 seconds. It is the pace of a high-school mile! Centrowitz, in the lead, seems to be conserving his energy for the final sprint, and nobody is calling his bluff. At the bell lap, with the runners still in a tight pack, the pace ratchets up, and Kiprop finds himself in 9th place with no choice but to sprint up the outside—burning a lot of matches just to make it up to Centrowitz’s shoulder. Watch the last lap: it’s incredible. It’s more like a battle—elbows flying, runners tripping, all fighting for position since position means victory. In the lead, Centrowitz is protected from all that. It’s like he’s running in a vacuum. His own race. At no point does he appear to “start a sprint,” or look around, or even alter his exquisite form in any way. On the homestretch, he maintains form all the way, and amidst an absolutely insane crowd screaming bloody murder—including me—he’s the first to cross the line. Gold! Centrowitz’s last lap is a sprinter’s pace—50 seconds. He looked around as if utterly shocked. His father, in the stands, literally loses his mind! After the victory, Centrowitz the Younger says: “I came into this championships with a different mind-set. Thought to myself, I’m in great shape. Just run to my capability . . . It was about being the best I could be on this day.” Centrowitz never let the chaos behind him dictate his strategy. He ran, and won, his own race.

One thought on “From Ryan Lochte to Ashton Eaton: 8 Things I Learned at the Olympics”