Home » Blog » Flying the Phantom 4 in Senegal: 9 Reflections from the Trip

Flying the Phantom 4 in Senegal: 9 Reflections from the Trip

I flew the DJI Phantom 4 in Dakar, Senegal last week. Over a mosque, through a statue, hovering near curious children. It was a great experience and really elevated the production values of my international development video. This was my first trip to Senegal, but my 20th trip overseas to make a video for an international development organization, with my company Dorst MediaWorks.

Since I just bought the Phantom 4 last month and this was my first project using it, I wanted to share nine reflections from the trip.

Bottom line, aerial shots take it to the next level. I’ve filmed in a lot of places in a lot of conditions, but I got truly excited when I put the Phantom 100 meters in the sky and started filming. Brilliant moving pictures.

At the first review session, my client loved the aerial footage. It was all they wanted to talk about. I spent 90% of my production days earthbound, shooting interviews and following characters, but the aerials garnered all the attention! 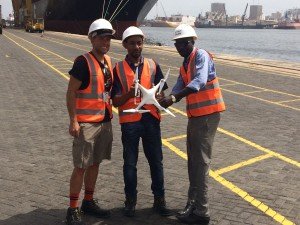 I was in Dakar to tell the story of how a newly renovated container terminal has helped Senegal’s economy, and how a unit of the World Bank helped make it a possibility. It’s a typical project for me, since I specialize in making videos for international development organizations, like subcontractors for USAID or partners of the World Bank Group. I bought the Phantom 4 because I knew it would be hard to show the sheer scale of operations from the ground—humongous cranes, massive containers flying through the air, rows of stacked containers. The copter was the perfect tool. If, by contrast, the story had been about an education project, the most I could have expected out of the copter would have been some transition shots. But on this gig, the Phantom gave pictures that were absolutely essential to the storytelling.

Here’s the finished film for the unit of the World Bank Group, MIGA: 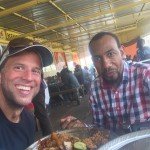 Unit Producer Mohamed Srour was great. A white guy in West Africa already gets a lot of attention. Throw in camera equipment and a drone, and you get very curious crowds! Flying a drone in Africa is a magnet for attention. Mohamed has been plying his craft for almost 30 years and was a joy to work with. He allowed me to focus on the creative. If you ever need a fixer in Senegal, give him a shout: 011 221 776300208 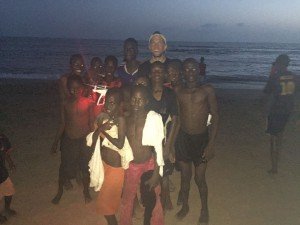 It was school vacation in Senegal, so loads of children were out playing during the day. Mohamed led us to some well-known spots to fly the drone, including the Mosque de Oukama. As soon as I sent the copter up, boys immediately started gathering around. I was glued to the DJI app on my phone, busy piloting, so the first time I looked up there were 30 boys crowded around me. As the sun set, the Phantom was about 300 meters west over the Atlantic. Suddenly, the app started beeping: the battery was running out! Even though I was pressed to land the thing immediately, I had the presence of mind to ask Mohamed to clear a safe landing area — the rotating blades can be very dangerous. Almost as soon as the Phantom landed on the sand, the envelope closed and all the boys crowded in again. We took a few photos, I high-fived everybody, and we wrapped for the evening.

This version of the Phantom has geofencing built in. I guess drunk guys flying drones onto the White House grounds didn’t help. The good news is that people can’t fly copters into the paths of airplanes. The bad news is that I can’t fly the thing in Arlington, Virginia where I live — or anywhere within an approximate 20-mile radius of the White House (that’s the big red circle).  I can’t even take off. What surprised me was that in Dakar, there was similar geofencing around the airport there. DJI calls it a Geospatial Environment Online (GEO), which is continually updated and also includes other sensitive areas like prisons, power plants, major stadium events, etc. Good idea, but bad news if you just want to practice flying at the local park and you’re too close to a no-fly zone. Like me.

I bought the Phantom 1 when it came out in 2013. Unfortunately, it didn’t have a gimbal and the GoPro I rigged up yielded shaky, unusable footage. But on the plus side, I became a proficient pilot. So when Red Bull hired me to direct a few episodes for a TV series, I flew the Phantom 2 Vision Plus: in Portland, Oregon and the Florida Keys. Then I got hired to operate camera for a PBS documentary in Jamestown, Virginia and I also flew there. But I hadn’t flown a Phantom for about 18 months when I got this Senegal gig. Yet it is so easy to operate that I had no problems at all.

I spent $1,600 at Adorama for the DJI Phantom 4 Quadcopter Aircraft With Pro accessory Bundle. This costs less than a Canon 70-200mm lens; less than a tripod; even less than my trusty Litepanel 1×1 I take everywhere! At this price, the Phantom 4 is a great value.

The Dakar story about the container terminal took me to a company that imports most of its product from Europe. I wanted to illustrate how a company became more profitable now that the container terminal is more efficient. “Time is money,” said the project manager in English (even though he speaks only French and Wolof!), which was exactly what I was hoping to hear. After the interview and some b-roll, I got out the Phantom (I always do it last in case people object). I figured I’d get a quick establishing shot and call it a day.

Suddenly, something special happened. The laborers went into hyper drive. With the copter overhead, I was able to see what I couldn’t see from the ground — they were all loading and unloading gas tanks in three independent dynamic assembly lines! Immediately, I lowered the copter to the far right of the scene and piloted a slow push left over a truck (see 00:12 – 00:23 in the video above). In one take, I was able to capture a beehive of activity that illustrated the project manager’s quotes perfectly. It was my favorite shot of the trip.

For more on the history of the DJI Phantom.

The History Of The DJI Phantom

One thought on “Flying the Phantom 4 in Senegal: 9 Reflections from the Trip”