In rural Afghanistan, you play by the rules. Don’t look at women; stay in the armored vehicle unless given permission to exit; when you get out, stay close to your armed guard.

Life was on lockdown, and the culture cloaked behind the local languages of Dari and Pashto (which I don’t speak). I had only 20 minutes to film the women farmers and I could only interview one. Then, back to Kabul before dark. 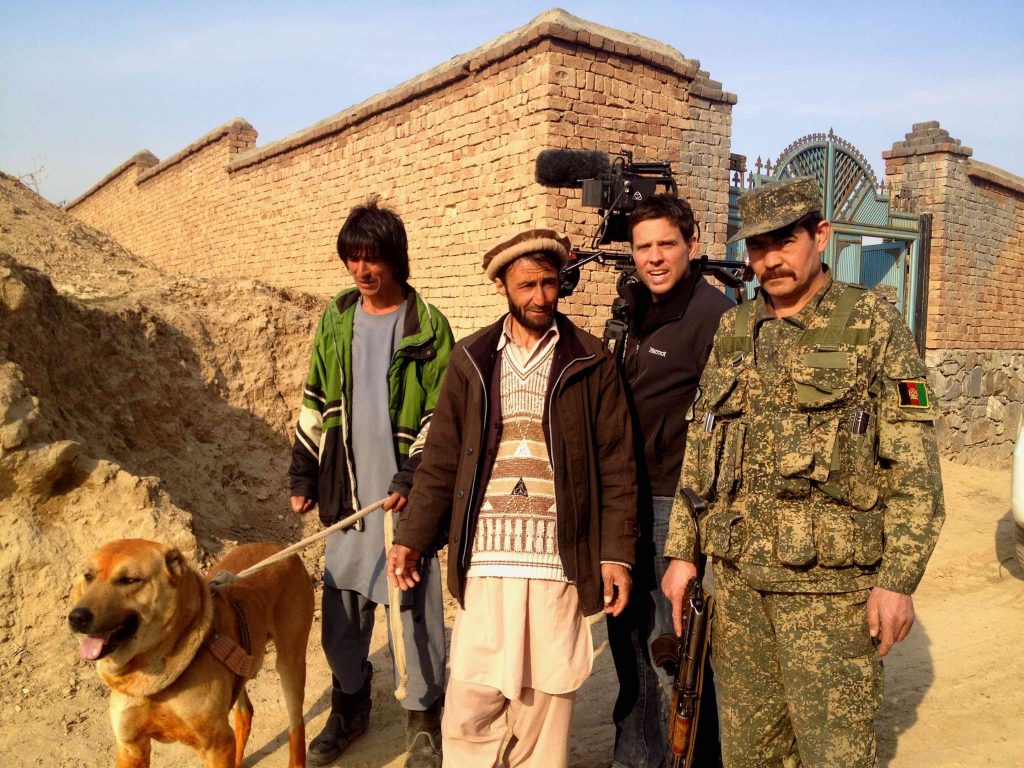 I did my job and we exited the high-walled compound. Then, inexplicably, villagers from all angles began heading directly at me and my camera, like so many iron fillings attracted to a magnet.

What could they want? It was unnerving. I’d been to dozens of countries and found myself in lots of new situations, but Afghanistan was next-level. Then I heard a voice, familiar and in English. My Unit Producer, Najib Siawash, was hollering at me from a hilltop: these men wanted a photo! Of course.

That was how, in a dry, war-torn Afghan village, I got a portrait with a fighting dog, his trainer, a farmer, and a military man.

Producing Videos for Organizations That Work with Countries in Conflict

If you’re an international organization working in conflict-affected or war-torn areas, who do you trust to tell the story of your life-transforming work?

Dorst MediaWorks has produced for the International Executive Service Corps, the International Monetary Fund, USAID, USDA, the World Bank, Women for Women International, and other groups in countries in conflict or emerging from it: Afghanistan, Bosnia and Herzegovina, Chad, Central African Republic, Colombia, Congo DRC, Lebanon, and Yemen.

However, in an increasingly interconnected world, where conflict, violence, and extremism do not respect national borders, unprecedented numbers of people are at risk.

That is what motivates us as a Washington DC video production company to work with international organizations that are working in these difficult places. Videos about people living in fragility, conflict, and violence help to shine a light on what is happening, and help motivate diplomacy, security, and mediation to prevent violent conflict and bring peace and prosperity.

Here are some videos we’ve produced:

Addressing the global challenge of fragility, conflict and violence is key to ending poverty and promoting shared prosperity. To tackle this complex landscape, the World Bank Group is taking a broader approach to fragility by focusing on prevention, and engaging during active conflict, transition and recovery. The organization is also helping forge partnerships between organizations that work on humanitarian aid, development, and peace initiatives, which explains the United Nations video interviews and footage we have in this one.

This video is what came from the footage I shot that day in rural Afghanistan. After the war, Afghan farmers — particularly women farmers — were getting virtually no support from the government. This is the story of how the Afghan Ministry of Agriculture improves how it does business, which helps farmers, spurs the economy, and contributes to stability. This is a program of the United States Department of Agriculture named CBCMP (Capacity Building and Change Management).

This video production for the International Finance Corporation includes footage that Dorst MediaWorks traveled to Sarayevo, Bosnia to capture as well as footage sent to us from war-torn Yemen. Today many countries face political instability or are struggling to emerge from years of conflict. This threatens to destroy once vibrant businesses, sending more people into poverty. IFC works in fragile and conflict-affected countries to help businesses weather the difficulties through stronger corporate governance and by building up companies’ resilience, so they can emerge from crisis as powerful engines of economic growth, hiring people, and improving lives.

This is the story of Rabih, who struggles to make a living as a fisherman before buying a new boat and building his business. And the microfinance institution Al Majmoua, which is extending loans to rural entrepreneurs in Lebanon for the first time. Dorst MediaWorks produced this USAID video for USAID subcontractor International Executive Service Corps.

This is the story of Hala, who had a passion for flower arranging and used to dream of starting her own business. And the microfinance institution Vitas, which is extending loans to women entrepreneurs in Lebanon for the first time. Since 1964, IESC has worked in 130 countries and helped to create or save over 1.5 million jobs.

This is the story of a USAID project, Lebanon Investment in Microfinance Program, which worked with nine microfinance institutions to improve access to finance and increase lending to business owners in rural Lebanon. The program awarded about $10 million in grants to microfinance partners, who then made 14,000 micro-loans totaling more than $30 million. In 2015, the nation’s first microfinance association was formed, which will better serve the needs of small business owners throughout Lebanon.

This is the story of a transformation. After the war, the Afghanistan Ministry of Agriculture is in disarray. Staff stand in line for an hour to sign in for work (if they come at all) and accounts maintain paper records. Through a USDA program named CBCMP (Capacity Building and Change Management) the Ministry undergoes an array of productivity and process improvements. Since 1964, IESC has worked in 130 countries and helped to create or save over 1.5 million jobs. Directed, shot, and edited by Steve Dorst.

This is a four-part video story of Colombia’s resilience in the face of economic crisis, which allowed it to move forward during an historic peace process. Today, a 53-year civil war with the FARC is a thing of the past, and rural Colombia is enjoying new investment and opportunity. The International Monetary Fund engaged Dorst MediaWorks to tell deeper documentary stories about its work in Vietnam, Ireland, and Colombia.

Washington DC Video Production: “Peace is Good for Business” [#3/4] The IMF in Colombia

Since 2002, Dorst MediaWorks has been producing videos for international organizations. That journey has taken our team to 50+ countries. Our mission is to be the best video production company for organizations that do good and help make the world a more just, sustainable, and equal place. If you share that vision or need a video, drop us a line…

If you’d like to check out more videos, refer to this YouTube playlist featuring all seven videos that Dorst MediaWorks produced for the International Executive Service Corps and the USDA in Afghanistan during the conflict: