November 21, 2022Behind the Scenes, Field Production, Videos for International Organizations

Home » Blog » Making a Film in Benin? 🇧🇯 19 Things You Need to Know

Making a Film in Benin? 🇧🇯 19 Things You Need to Know

I just returned from my first film shoot to Benin, in west Africa.

After being off the radar for most Americans, Benin has been in the news with the release of Hollywood’s “The Woman King.” But the producers stirred up controversy by filming in South Africa, nowhere near the authentic homeland of the Kingdom of Dahomey.

Meanwhile, as if to reassert a claim to its own history, Benin unveiled three impressive national monuments, including a 100-foot high Amazon statue honoring Dahomey’s women warriors.

Despite the new attention, Benin is still off-the-beaten path, with an undiscovered feel, and a fascinating, diverse culture. Without a film industry, however, producing here requires preparation.

Here are 19 bits of advice to help you succeed.

1. No Covid vaccine required 💉
I didn’t need to show my Covid vaccination card, but brought it just in case. Here’s more from the Beninese Government related to the reduction of preventive measures.

2. Passport control: Get your E-Visa 🛂
If you’re a US citizen, you need an e-visa. In an easy online transaction, I obtained the 30-day multi-entry, and it set me back about $85. They checked it on my way in and way out. I kept the printed version in my passport, as requested, but passport control accepted the digital version I showed them on my phone: apply here. 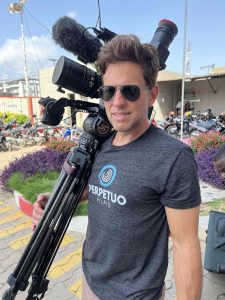 3. Customs: Have a letter of invitation and an expediter 💪🏽
I breezed through customs because my client sent an expediter to help. He stood with me in line for passport control, helped with my bags, and then led me through the x-rays and customs. Multiple soldiers were understandably curious and pawed through my equipment (always stressful). So we pulled out the letter of invitation with my client’s logo, which satisfied them. (They did not request my equipment list, which I keep on me to help communicate that my equipment is for my use, NOT for resale. The list includes, make, model, year, and a low-ball value.)

4. No “authorization to film” required 🎥
In some countries, the presence of a camera can be threatening to a government, and to film you need an explicit authorization. In Benin, however, I did not obtain a permit. And I never felt like police were intimidated by our film crew. Outside of the main cities of Cotonou and Porto-Novo, it was very relaxed. Only twice in Cotonou did my fixer need to explain to a policeman who we were and what we were doing. We did not have an “authorization permit.”

5. The police are trustworthy 👮🏿‍♂️
I’ve been in a lot of countries where the police stress you out, but Benin’s police were professional. The city of Cotonou was organized, clean, and law-abiding in ways that many African capitals are not: trash pick-up was on point, traffic lights worked, and drivers respected them.

6. Sorry, no drones in Cotonou (yes outside)
There was a time when you could fly a drone freely in Cotonou, but those days are gone. However, once you’re out of the city, you’re good.

7. Hire a fixer
Few of us will be able to hit the ground running in a place as different as Benin without a fixer to do the localization services: translation, security, scheduling, logistics, etc. I had a super time working with Teddy Attila. He’s a director/shooter/producer based in Cotonou. He has a drone, his own equipment, (and has a bunch of drone footage of places that are tough to fly near now). Contact Teddy on Instagram.

8. Adapt your plugs ⚡️
You can use the same plugs you use in Europe (type C) and especially France (type F). France adapters.

9. Brush up on your French! 🇫🇷
Benin has many languages, but French is best. Only expensive hotels will have English-speaking staff. In the south, people speak Fon, while other languages – including Yoruba, Mina, and Fulfulbe are widespread elsewhere. Learn more here. 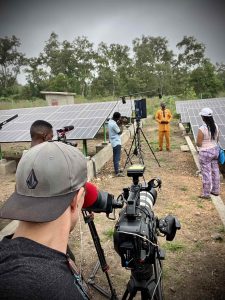 10. Prepare for the heat! 🥵
The temp was hitting 95 degrees for me in the afternoon in November. In general, the south is hot and humid, whereas the north is hot and dusty. There are broadly two seasons: the wet season (April to Oct/Nov) and dry season. For our indoor interviews with VIPs, I dressed in long pants and collared shirts. For everything else, I dressed in a t-shirt and shorts, with sunblock, hat, sunglasses, frequent electrolyte drinks, and my nerdy, but trusty arm coolers. I chose to eat light for breakfast and lunch so I wouldn’t feel sluggish. In summary: did I mention it’s hot! (More on the average daily highs and lows during your trip.)

11. Where to stay? 🏨
I stayed at the Golden Tulip on Boulevard de Marina, right across the street from the US Embassy. In my experience, it was a great hotel (Novotel and Hotel du Lac are others that people mentioned). It was centrally located, and easy to get in and out of the hotel every day with my equipment. They have an ATM in the lobby, 24-hour room service, responsive front-desk staff, a big swimming pool, a gym, and a spa with massages starting at 20.000CFA (about $30). On my day off, having a salade niçoise and large bottle of mineral water poolside was an awesome way to rejuvenate after our long shooting days. 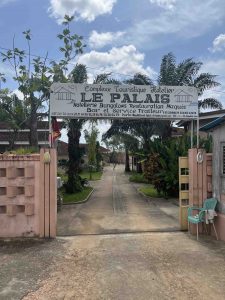 12. Where to eat? 🍗🐠
During two weeks in Benin, my favorite meal was in Porto-Novo at Le Palais (pictured): a whole grilled sea bass, with sides of rice, plantains (aloko), and pimant (hot chili sauce 🌶). In Cotonou: For great food and live music at a cool venue, try the rooftop at Home Residence Hotel. Codebar, near the airport, is an upscale, expat-friendly restaurant and bar, which gets lively on the weekends. La Teranga (don’t miss the shawarma) and Livingstone are low-key, quality eateries in the Haie-Vive neighborhood. For a change of pace, grab some Indian at Shamiana. Before you leave Benin, make sure you’ve tasted aloko (plantains), peanut sauce, and wagashi (cheese).

13. Where to go out? 🍾 🕺🏿
Clubs don’t really get going in Cotonou until well past midnight, so for most of us that’s not an option on a school night. Fridays and Saturdays are lively and fun at Homeboy Lounge, Makoomba, and VIBES (in Fidjrosse). For fewer expats, go to VIBES, where you can have a Beninoise beer and a handmade pizza on the second-floor patio overlooking the neighborhood, before hitting the club for some highlife music spun by a local DJ. 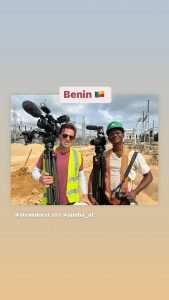 14. Greetings 👋🏾
In Benin, people greet each other more than we’re used to. It’s important to start every conversation with a greeting. Use “bonjour” before noon, “bonsoir” after lunch, “salut” when talking to young people or a friend, “a demain” when you’ll see the person tomorrow. Shake hands with men and women. Ask people how they’re doing (ça va?) and inquire about the health of their family.

15. Comms and cell phone service 📲
My AT&T said they offered the $10/day International Day Pass for Benin, which allows you to use your phone normally. But it didn’t work for me (iPhone 13). As a result, I relied on WiFi and my colleagues’ hotspots. We all used WhatsApp to communicate. 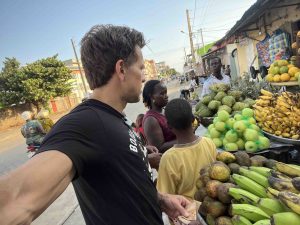 16. Where to buy groceries? 🛒
The Erevan Super U, next to the airport, is great. Or grab some fruit at a market. A reminder to think twice before eating somewhere without running water. I only had salads and greens at upscale restaurants and hotels. I specialized in grilled fish and meat with rice and plantains.

17. Transport 🚕
We had a Toyota LandCruiser, which was fortunate, since we did a lot of back-country 4×4 to remote villages. In Cotonou, I’d take taxis to dinner from outside the Golden Tulip: 3.000 CFA one-way or 5.000 CFA per hour if I had him wait for me and take me around. Get a phone number and call when you’re done. Better to have a taxi driver that the hotel knows.

19. Sightsee 🏝
Once upon a time, I used to race in and out of countries, focused exclusively on the work. But I’ve learned to stop to smell the roses. This trip, I booked a few extra days for sightseeing, and I’d encourage you to do the same. Go to Ouida, located about an hour outside Cotonou. It’s  world headquarters for voodoo: visit the Python Temple, Sacred Forest, and have lunch at the Palmeraille. In Cotonou, go to a beach north of the airport on Sunday afternoon for a great social ritual. See the graffiti wall along Boulevard de Marina.

Can’t miss: Hang out at the new Amazon statue at dusk. If it’s a nice evening (or weekend), there could be hundreds of locals. Greet a few with a “bonsoir.” Smile and do a half wave. Strike up a conversation. People are super nice here. And in the shadow of this new monument, as you connect with locals young and old, you’ll be thankful you did.

Have a great shoot! And drop me a line. What did I miss? What did you love discovering during your film shoot in Benin?